What’s New With YOU? Updates from congregations around the Church of the Lutheran Confession

“Unless the Lord builds the house, they labor in vain who build it; Unless

the Lord guards the city, The watchman stays awake in vain.” (Psalm 127:1)

In one sense, there’s nothing new in Okabena. The same Lord Who was faithful in the days of Psalm 127 is still faithful year after year and month after month. What is new are the myriad ways God carries this out in His Church today. 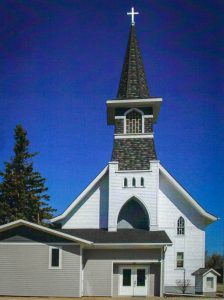 In a time when less than half of Americans identify as Christian, and in a rural area where the population is relatively sparse and generally static, the Lord has blessed us with new contacts and members through our Christian day school. This year’s K-8 enrollment stands at sixteen. Of those, one half are non-members. Other schools in our fellowship have much larger enrollments and a greater percentage of non-members, but for a small town (population less than two hundred), this is obviously the Lord’s doing. The Lord Who builds the house also supplies the resources, including three fulltime teachers, Ruth Eigenberg, Ben Hansen, and Lana Strike.

The trend in communities like ours is for churches to consolidate or close for lack of people. This is especially true the further our nation veers away from Christianity. The spiritual decline in America is both sad and a great opportunity at the same time. The mission field is everywhere, from the people who live next door to the souls in darkness overseas. Only eternity will fully reveal how the Lord built His house.

Some of the Christian day school contacts were the result of outreach efforts, such as vacation Bible school, handing out materials in area parades, and a free ice cream social on July 4. Others came via members who shared their faith. In the end, it is God’s doing, not ours.

Churches have groaned under the weight of COVID-19 restrictions and regulations. Yet, even in the midst of the pandemic, the Lord builds His house. He provided the technology and the resources for us to livestream our worship services. This became an important way to nurture and preserve faith at a time when nursing homes were in lockdown and social contact was forbidden. The live stream has become an outreach vehicle to non-members in the area and across the world. The Lord builds the house.

God builds faith and love through the Gospel. In addition to worship services, Sunday school, and Bible class, our ladies have done a variety of book studies. An informal, lay-led Bible class is held weekly on Tuesday afternoons.

For years, we’ve discussed installing an elevator that would make our multi-level building more accessible. As with other churches of this vintage, it seemed like a good idea at the time to build the sanctuary high enough above ground that worshipers would go “up” to the Lord’s house, just as believers in Bible times went “up” to Jerusalem. Stairs were less of a problem in 1914 than they are today, because people with disabilities were usually homebound. Thankfully, that has changed. The effort to overcome the difficulty of church and basement steps remained until the Lord provided a place for the elevator to be installed as well as the resources to make it happen. Finished in 2020, the lift receives even more use than anticipated.

Thanks to COVID, the celebration of our church’s 125th anniversary and the 25th anniversary of the Christian day school wasn’t possible until last summer. Looking back on 126 years, it’s hard to imagine a time in history that witnessed a greater shift in technology, standard of living, methods of farming, transportation, communication, and so forth. But the main thing never changes. The same Savior Who came to bless His people as they gathered at the end of the 19th century comes through Word and Sacrament with every spiritual blessing today. As the Lord quietly transfers His people from the church on earth to the church in heaven, He continues to build His House. 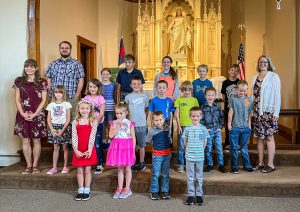 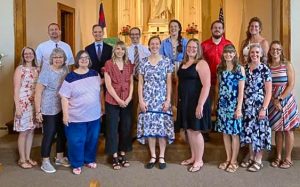 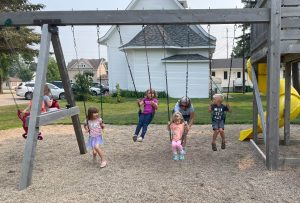