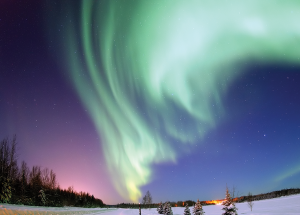 I remember the summer I was a tour-bus driver in Glacier National Park. Drivers were taught park history, information, and geological features. It wasn’t any surprise to me that the “geological features” section was full of terms, time frames, and explanations from evolutionary geology. It got old in a hurry. How absolutely refreshing one evening, in the quiet of my room, to open up to Genesis 1 and read the Lord’s simple, straightforward account of the miraculous creation of the heavens and the earth!

In the beginning God created. God said, and it was so.
The heavens, the earth, light, firmament (atmosphere), seas, dry land, vegetation, sun, moon, stars, fish, fowl, cattle, creeping things, beasts. And He made man, male and female. Everything was very good!

How easy to follow! How simple! The beauties, intricacies, and mysteries of the world, all created by God in six days. Even a child can grasp it!

God created by His Word. He “said”; and it was so! All out of nothing, and perfect. Such power! Such wisdom! Such love and concern!

The word create, in Hebrew, means more than simply “to make.” In English, the question “What did you create in the kitchen today?” means more than, “What did you make for dinner?” But even there, create does not mean out of “nothing.” The fact that God created out of nothing is evident  from the words “in the beginning” (vs. 1). The BEGINNING. No-thing had been. Only eternal God! The Creation was the beginning even of time, the beginning of the world, including the atoms and molecules of which all things are made. Had any-thing existed prior, it would not have been “the beginning”!

Genesis 1 uses create in three different sections. Verse 1, God “created,” or made in His own special way, the heavens and the earth—arrayed in the finest of greenery and with the countless entities of space (verses 1-19, days one through four). At verse 21 God “created,” called into being in His own special way, the living creatures of the sea, air, and land—with their wide variety of characteristics and natures (verses 20-25, days five and six). In verse 27, God “created,” brought into existence in His own special way, man—a being far different from fish, birds, and beasts, despite any similarities—male and female—made in His image, holy and righteous— ruler over all the earth (verses 26-31, day six). “Then God saw everything that He had made, and indeed it was very good”  (vs. 31).

Such a wonderful world and life! Sad to say, creation isn’t so “good” any more. Catastrophes, disease, hate-filled hearts, death. The cause? Man’s disobedience to God. Sin. (Genesis 3).

Man’s sin and the corruption of creation are not the end of the story, however. Sin and its effects are lifted
and replaced with life, new life forever, through God’s dear Son! Jesus has rescued man, God’s special creation. “. . . God, who is rich in mercy, because of His great love with which He loved us, even when we were dead in trespasses, made us alive together with Christ” (Ephesians 2:4-5). Through faith in Christ, the crucified and risen Savior, we are forgiven, are pronounced not guilty by God. We are created—re-created!—in true righteousness and holiness. “Therefore, if anyone is in Christ, he is a new creation; old things have passed away; behold, all things have become new” (II Corinthians 5:17). On the last day we will be raised with glorious bodies to live with God forever in heaven! Perfect once again!

Creation was great, but re-creation in Jesus is even greater! God’s created world before sin was amazing, and still is; but new life in Christ is even more amazing! It is so simple, so refreshing, so glorious!