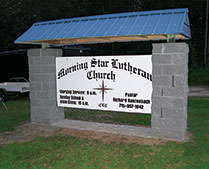 Fairchild lies thirty miles southeast of Eau Claire at the junction of Highways 12 and 10 among the woods, hills, and farmland of northwestern Wisconsin. Fairchild was founded in the 1870’s and became a thriving sawmill and railroad town. For years, Fairchild boasted The Big Farm Store, “one of the biggest retail mercantile institutions in northern Wisconsin” (The History of Eau Claire County, Wisconsin, Past and Present, 1914, pp. 615-618).

The decline of the timber industry led to the decline of a bustling Fairchild. The high school graduated its last class in 1968. Front Street has only a post office and bank remaining. There is little in the way of employment. The current population is five hundred, many of whom struggle financially.

What is the story behind Morning Star’s beginning? In the 1990’s, Messiah congregation of Eau Claire (see the January 2015 Lutheran Spokesman) was seeking to serve its members living in the small communities southeast of Eau Claire along Highway 12. Weekly Bible classes were held at Fairchild. Messiah also conducted vacation Bible school in Fairchild. Five Messiah youngsters attended, while forty-five other children joined them! Soon Sunday services began. Those leading the services included ILC Professors John Reim, David Lau, and Gordon Radtke, ILC seminary student Mike Schierenbeck, and others. Prof. Radtke began his ministry to the group in January of 1995. He retired as a professor that summer, but continued to serve the Fairchild outreach group as a part-time ministry.

Worship services had been held at various places, but soon after start-up were moved to a mobile home converted into a church. The “trailer” continued to be their home until December 19, 1999, when a new church was dedicated. The structure was built by volunteers under the leadership of CLC member Jack Mayhew, of Valentine, Nebraska.

In January 2000, the Fairchild group filed the necessary papers to become an independent congregation, and picked the name Morning Star. Morning Star called Pastor Gordon Radtke to continue his ministry among them. This he did until August of 2009, when he retired at the age of ninety! The ensuing vacancy was filled by Professor John Ude.

During all the years of outreach services, development, and growth, Morning Star was not funded by the synod’s Board of Missions. It was entirely a mission effort of the members of Messiah in Eau Claire. Morning Star is indeed a daughter congregation of Messiah and expresses its thanks!

In the spring of 2010, Morning Star called Richard Kanzenbach of Watertown, South Dakota, to serve as its pastor. He accepted the call. Peace with God of Onalaska, WI, agreed to form a dual parish with Morning Star in late 2011. Pastor Kanzenbach was able to quit his part-time secular employment and devote himself to the ministry full-time.

Morning Star has approximately eighty members. Average attendance is thirty-five. Sunday School and Friday School (a repeat of the lesson for those who missed) averages eight. Most members live within
a forty mile radius of Fairchild—thirty souls in
Fairchild, twenty-five in Eau Claire, and the
remainder scattered about.

The message of sin and forgiveness of sin in Jesus continues to be preached at Morning Star. Whether the community of Fairchild is in its glory days or not, glorious Good News is being proclaimed by Morning Star—Jesus of Nazareth, true God and true man, has set us free from the guilt of our sin and the due condemnation it deserves: death and hell! “He was wounded for our transgressions, He was bruised for our iniquities, the chastisement of our peace was upon Him, and with His stripes we are healed” (Isaiah 53:5-6, KJV). The refreshing message—that Jesus was righteous in our place, died to pay the penalty for our sins, and rose again in victory, for us!—is being announced to Morning Star’s members and to the Fairchild community. “The wages of sin is death but the gift of God is eternal life in Christ Jesus our Lord” (Romans 6:23). Morning Star is and remains a home for sinners. 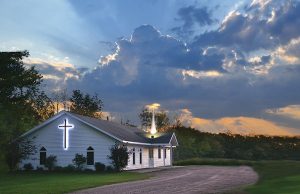 Morning Star’s efforts to share the Gospel are surely small and weak, but we ask the Lord to guide us and bless us, and to give us strength and wisdom to move ahead. The congregation sends out three mass mailings a year to the larger Fairchild area containing simple messages of Jesus the Redeemer from sin and hell, inviting recipients to join us for Christmas, Easter, or VBS. We also have two sets of small roadside signs bearing simple Law and Gospel messages with our name, phone, and website. Recorded Sunday sermons are available at our website, www.fairchildlutheran.com. The seeds of Law and Gospel are being sown.

It is impossible to know what will happen in the next twenty years of Morning Star’s existence. However, we do know, “[My Word] shall not return to me void, but it shall accomplish what I please” (Isaiah 55:10). We move ahead by the grace and mercy of Christ, privileged to
be His children and His servants, proclaiming His
saving Name!