NOTES FROM THE FIELD (THIRD IN A SERIES)

In this series, those involved with CLC foreign missions profile one area of our overseas endeavors.

Written by: Pastor Todd Ohlmann of Faith Lutheran Church in Manchester, Missouri, he serves as chairman of the CLC Board of Missions.

Bakthavachalam, Moshi, Sri Kalahasti, Ibrahim, Bulawayo, Makanya, Bhitrakoti, Kalyamo, Nireekshana, Wiskey, Hattibang, Rajamani, Chennai, Malyi, Lusaka—these are the names of just a few of the many individuals and places with whom and where the Lord has allowed the CLC to share in the privilege of proclaiming the truth of His saving Word. For reasons which can only be attributed to God’s grace and mercy, many CLC members have been able to meet the individuals and visit the places listed above. Most of these meetings have taken place through the CLC Mission Helper Program. While the main purpose of the Mission Helper Program is to proclaim the Gospel of Jesus Christ, there are many blessed byproducts that we have come to expect from our gracious Lord. One of those blessed byproducts is the opportunity to get to know and build personal relationships with the brothers and sisters in Christ with whom we are able to work, shoulder to shoulder, in mission fields very ripe for harvest.

One of these brothers in Christ is Pastor Ibrahim R. Lyimo. He has been working independently in Zambia, Africa since 2010. Pastor Ibrahim is thirty-eight years old. He holds degrees in elementary and secondary education and has course work completed toward another degree in school administration. For several years he taught at a public secondary school in Tanzania. 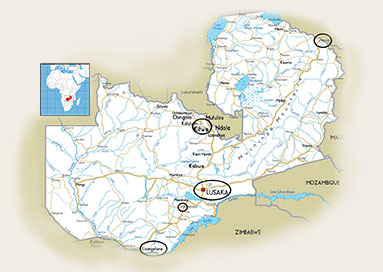 In 2006, Pastor Ibrahim began thinking that the Lord wanted him to use his teaching skills to proclaim God’s Word. This is what led him to attend a Pastoral Training Seminar that was being conducted by Missionary Koenig during one of Missionary Koenig’s visits to East Africa. In 2007 Pastor Ibrahim was one of the first students to enroll in the seminary in Himo, Tanzania. When that seminary was forced to close a few years later, Pastor Ibrahim was just a semester shy of graduation. The next few months left him wondering what the Lord had in mind for his future. By this time, he was fully convinced that the Lord wanted him to dedicate his gifts and abilities to sharing the “one thing needful.” It was during this time that he received a phone call from a friend named Peter.  Peter and his family had moved from Tanzania to Lusaka, Zambia, for work opportunities. Peter explained to him that he could not find a church in Lusaka that taught the truth of God’s word. He asked Pastor Ibrahim to come to Zambia to start a congregation and to begin training evangelists to help spread the Word of God. That was in late 2010. Pastor Ibrahim says that it didn’t take long for him to make the decision to leave his home and move to Lusaka. He knew in his heart that the Lord was calling him there.

It was about one year later when representatives from the CLC came to Lusaka, at Pastor Ibrahim’s invitation, to investigate an apparent opportunity for the CLC to proclaim the truth of God’s Word in Zambia. What the visitors found was a dedicated and faithful servant of the Word who was sacrificially serving the Lord.

That is how Pastor Ibrahim came to work in Zambia. Today he still lives a in a small room in an out-building on the property of his friend Peter. He serves three small congregations. One congregation is in Lusaka where Peter and his family attend. The second congregation is in a town called Nakonde near the Tanzanian border. The third congregation is in a rural village southwest of Lusaka called Shimabala. He serves a total of fifty-nine adult souls and many children in these three congregations. He is also training six young men as evangelists to work with him in spreading the Gospel to more rural villages. His weekly schedule also includes evangelism visits to a shanty town that is built on a local dump on the outskirts of Lusaka. Additionally, he makes evangelism visits to an AIDS hospice facility where those nearing death are kept comfortable.

Pastor Ibrahim also travels to Bulawayo, Zimbabwe every other month, at the request of the CLC Board of Missions, to work with Pastor Liberty Atawa and a few other pastors in the area who have completed extensive correspondence courses with the Board of Missions. Their desire is to establish a confessional Lutheran church body in their country. Pastor Ibrahim has made several contacts in the towns and villages that are along the bus route that takes him from Lusaka to Bulawayo. He reports that he has established a preaching station in Livingstone, Zambia. He is hopeful that a congregation will be started there soon.

There is also work being done in northern Zambia just over the border from the Democratic Republic of Congo (DRC) in the towns of Ndola and Kitwe. This work is a project of Pastor Yumba, who lives and serves as the chairman of the CCLC in Lubumbashi, DRC. Pastors Yumba and Ibrahim meet together when our CLC visiting missionary makes his annual visit to the DRC.

Pastor Ibrahim receives no salary, either from the congregations he serves or from the CLC. His only compensation is room and board from families of the congregations he serves. He does receive a small subsidy from the CLC Board of Missions that provides for his travel expenses to Zimbabwe, along with a few teaching supplies and transportation costs for the six young men he is training to be evangelists in the Lusaka area.

In 2012, a Mission Helper Team visited Tanzania. They had the opportunity to work closely with Pastor Ibrahim when he returned to Tanzania for a month to serve as a translator for the team. These few individuals had the privilege of getting to know a truly inspiring and dedicated servant of the Lord. If all goes as planned, another team of Mission Helpers will travel to Zambia in July of 2015 to work alongside Pastor Ibrahim in the harvest fields. He is eager for their arrival and has lots of work planned. Pastor Ibrahim reports that there are several areas in and around Lusaka and on the way to the Zambia/Zimbabwe border where he would like to conduct child evangelism. What an opportunity for these Mission Helpers to share in the privilege of proclaiming God’s saving Word as they also get to know and learn from this faithful man of God!