Messiah Lutheran Church, in Hales Corners, Wisconsin, is one of the charter congregations of the Church of the Lutheran Confession (CLC). The first meeting of the group that would later go on to found Messiah Lutheran was in the home of Ruth Schaller, a parochial school teacher in Milwaukee. The church was formally established as Messiah Lutheran Church in 1960, and at that time it called Pastor Paul Koch as its first shepherd.

This small group of believers had no permanent facility for the first eight years of its existence. They met in various rented facilities in the greater Milwaukee area. When Pastor Koch accepted a call to teach at Immanuel Lutheran College, the church called Pastor David Lau as the second shepherd of the flock, even though they still had no permanent location. Although the members experienced a number of setbacks in their search for a permanent home during this period, the Lord eventually led them to the purchase of a three-acre tract in the village of Hales Corners (about fourteen miles from Milwaukee). This site is the present location of the church and school. When Pastor Lau accepted a call to serve the Bowdle, SD congregation, Pastor Bertram Naumann was called to become the third shepherd of Messiah Lutheran, and the first one at the Hales Corners location. 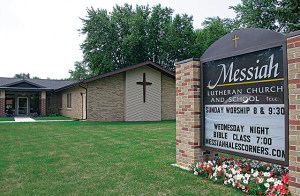 Having acquired a permanent location, the congregation immediately began a building program. Using a great deal of volunteer help, they built a parsonage and a church building with an educational wing. The inclusion of an educational wing in the initial church building reflected the vision of the congregation: from the beginning, they realized the importance of Christian education, and they maintained a goal of eventually establishing a Christian Day School. In fact, the encouragement of an effort to establish such a school was included in the calls of all their pastors. In the meantime, Pastor John Pfeiffer (the fourth shepherd of the flock) began Saturday School classes for the purpose of improving the religious training of the congregation’s youth. This was yet another reflection of the congregation’s recognition of the importance of Christian education.

Finally, in 1993, the long-standing goal of having a Christian Day School was realized when teacher Ted Quade was called to be the principal and teacher of Messiah Lutheran School. The anticipated school enrollment for the first year was only about a dozen students. By the year’s end, however, the actual enrollment reached twenty-six—more than double what had been expected. The blessing of this increase in enrollment also brought some challenges, but the Lord provided solutions. The challenge of an increased workload for Mr. Quade was met through volunteer help, and the challenge of limited space was met by removing church pews during the week to make room for classes, and then replacing the pews before the Sunday service. 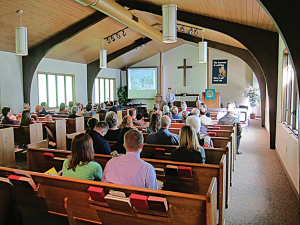 Over the years, both the membership numbers and the physical plant of Messiah Lutheran Church and School have grown as a result of the Lord’s blessings. In 1994, the original educational wing was remodeled, and two new classrooms were included. A second teacher was called in 1996. Four years later, the position of kindergarten teacher was added. Another classroom, an activities room, and a kitchen were built in 2006. In 2013, the kindergarten program was expanded to include both K4 (kindergarten for four-year-olds) and K5 programs.

Messiah Lutheran’s commitment to Christian education has resulted in a close relationship between Messiah Lutheran Church and Immanuel Lutheran High School and College in Eau Claire, and this close connection has been the source of mutual blessings to the two institutions as well as blessings to the CLC at large. At any given time, the number of former Messiah students attending Immanuel is in the teens. Several former Messiah students have gone on after their attendance at Immanuel to become CLC pastors or teachers. Also, four Messiah pastors and one Messiah member have been called to be professors at ILC. Over a dozen vicars and student teachers from Immanuel have been blessings to Messiah. Truly, the Lord has showered His blessings upon all of us through these educational programs.

Throughout its 54-year history, Messiah Lutheran has remained true to the Lord’s Word, even as both challenges and blessings have come to this group of believers. Trust in and love of the Lord leads the congregation in its active evangelism efforts of sharing the Gospel locally, including the live streaming of weekly church services. The congregation continues to provide Christian education for the young with Sunday School, Vacation Bible School, and youth activities; as well as through its support of the synodical Traveling Vacation Bible School program. We are mindful that the people involved in these programs are the future of the church. We see the Lord’s blessings on these efforts in many ways, including the blessings of former Messiah Lutheran School students who later remain in the area and bring up their children with Messiah as their church home.

Several of the charter members still worship every Sunday at Messiah, while others have gone on to be with the Lord. Messiah’s 220 souls across southeastern Wisconsin and northern Illinois pray daily that they faithfully continue to preach, teach, and practice the true doctrine of the Word, while seeking to share His grace with all until He returns. To the Lord be all the praise, glory, and honor—He is Messiah!