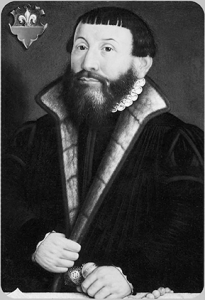 HEROES OF THE FAITH
(First in a Series)

As we approach the 500th anniversary of the Reformation, we will take a brief look at the lives of some of the most influential and important Lutheran theologians.

The Lutheran Church is so named as a consequence of the enemies of Martin Luther, who mockingly called those “Lutherans” who confessed the doctrines of Scripture taught by the confessor who was God’s tool in reestablishing the Word alone as the foundation of the Church. We fondly celebrate the Reformation of 1517. What we may not remember, and many perhaps do not know, is that there was a second Martin—Martin Chemnitz (1522-1586).

Martin Chemnitz, a man of calm demeanor, stood firmly on God’s Word and in defense of Lutheran doctrine.

Chemnitz studied astrology initially. Eventually he gave it up and became a theologian of such note that it is said, “If the second Martin had not come, the first Martin would not have stood.” Chemnitz came to the University of Wittenberg in 1545 (Martin Luther died in 1546), where he heard Luther preach, but where by his own admission he did not pay close attention to Luther’s lectures. At Wittenberg, Chemnitz, who later taught at the university, was mentored chiefly by Philip Melanchthon, a scholar, theologian, and close friend of Luther. Melanchthon helped Chemnitz in understanding the distinction between Law and Gospel. When it came to theology, Chemnitz was largely self-taught. Together with his personal study of Scripture, Chemnitz’s studies also included intense study of Luther’s works. After the death of Luther, turmoil, to which Melanchthon contributed, arose among the Lutherans.

Melanchthon tended to compromise frequently in an effort to keep peace. He was inclined toward Ulrich Zwingli and John Calvin, who both denied the real presence of the body and blood of the Lord in the Sacrament. Other issues arose that moved followers of Luther’s doctrinal position to brand Melanchthon and his followers (known as the Philippists) as teaching contrary to Scripture and sound Lutheran doctrine. Meetings between the factions could not bring peace and unity, in part because during this time others who stood for what Luther taught became extreme in their defense of Luther’s doctrine. It was a difficult time for the children of the Reformation, one that made them a laughingstock to Rome and threatened to undermine Reformation Lutheranism.

Martin Chemnitz, a man of calm demeanor, stood firmly on God’s Word and in defense of Lutheran doctrine. Foremost among the reasons evangelical and orthodox Lutherans appreciate Martin Chemnitz is that he was one of the chief contributors to and one of the original signers of the Formula of Concord (1577), a signature Lutheran confession which appears with others in the Book of Concord of 1580.

His contributions to the Formula of Concord were by no means his only contribution to the cause of Lutheranism. Chemnitz also wrote Examination of the Council of Trent (4 volumes), The Two Natures of Christ, and The Lord’s Supper. The latter was a response to Melanchthon’s compromising position on the Lord’s Supper.

Unlike Melanchthon, Chemnitz stood firm against every attack of those who undermined orthodox Lutheranism. These included the Crypto-Calvinists—Lutherans who secretly held to Calvinism with respect to the Lord’s Supper.

Martin Chemnitz was a man of many talents. He attained a master’s degree as well as a doctorate. He was  a professional librarian as well as a pastor and teacher. He was offered positions in government, but by the grace of God remained a theologian and educator through whom the Lord blessed the Church.

Scripture is the foundation of our faith and hope.
But it also says, “Remember those who rule over you,
who have spoken the word of God to you, whose faith follow. . .” (Hebrews 13:7). In his own words we say of Chemnitz, “. . .We love and praise the testimonies of the fathers which agree with the Scriptures.”

Daniel Fleischer is a retired pastor and former president of the Church of the Lutheran Confession. He lives in Oakdale, Minnesota.