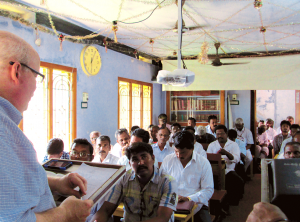 NOTES FROM THE FIELD
(First in a Series)

In this series, those involved with our CLC foreign missions profile one area of our overseas endeavors.

People who had been there—people who knew—told me that my trip to India would change my life. I thought that was hyperbole. It wasn’t.

In October of 2014, I was privileged to travel to southeast India on behalf of the Project KINSHIP Committee of the Church of the Lutheran Confession (CLC). For more than 30 years, Project KINSHIP has supported orphans, seminary students and widows in Africa and India, and more recently in Nepal and Myanmar. The generous contributions of stateside CLC sponsors, impelled by hearts of faith and zeal for the Lord’s work, have seen Project KINSHIP grow and thrive over the years. 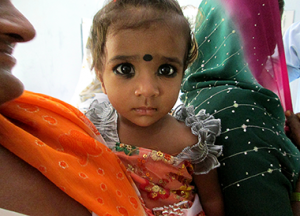 My assignment took me first to the annual Joint Asia Pastoral Conference in Nellore. Here, leaders of churches affiliated with the CLC in India, Nepal, and Myanmar met to study God’s Word and report on progress in their respective mission fields. It was informative—and edifying—to meet these leaders and learn
about their work.

From there we traveled to the headquarters of one of our affiliated church bodies, the Church of the Lutheran Confession in India (CLCI), located in the east-central province of Andhra Pradesh. Here, in the village of Nidubrolu, stands the compound where the Benjamin family care for thirty orphaned and abandoned children, as well as providing theological training for the 38 students of  Immanuel Bible College. Work here began long ago, when CLC people came into contact with Pastor V.S. Benjamin. Though he is now advanced in years, the elder Pastor Benjamin still watches over the Lord’s work. His sons Jyothi and Nireekshana, trained pastors themselves, oversee the administration of the orphanage and Bible college. 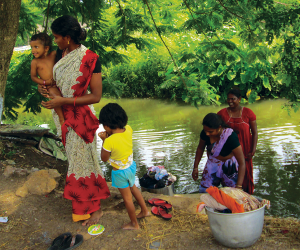 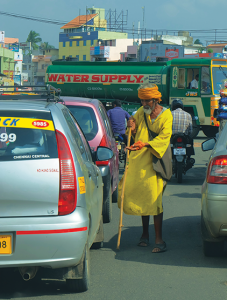 Missionary Ed Starkey, his wife Janice, and I arrived at the compound in Nidubrolu on a Saturday afternoon. As we entered, we were greeted by a line of smiling children who welcomed us with a song and showered us with flower petals. A special service had been arranged, featuring hymns, songs by the children, and a formal greeting by the elder Pastor Benjamin. The students of the Bible college attended as well, some of them traveling quite a distance, though it was a Saturday and the Bible college was not in session. A feast followed, with savory fried rice and the usual multitude of spicy curries and chutneys.

Over the next few days, Missionary Starkey and I were honored to be the guest speakers at worship services in several area CLCI churches. Those services, and the Christians we met there, will remain etched in my memory. Though the sermons needed to be translated from English into Telugu, the worshipers seemed to hang on every word. All the adults carried Bibles, and the Bibles were well thumbed. Whenever the preacher mentioned a Scripture passage, the reference would hardly be out of his mouth before one of the worshipers began reading it aloud!

Following every service was prayer time, when the pastors would each take a line of people who were waiting to have individual prayers offered for them. The needs were real—a child with typhus, a man crippled in a traffic accident, a woman whose husband had strayed from the Lord.  Equally obvious was the unfeigned faith of these people, Christians who know that the throne of God’s grace is the only place to go in time of need, and who are unapologetic about going there!

Monday morning saw us back at the compound in Nidubrolu, lecturing to the students at the Bible college. These men, too, seemed to hang on every word as their instructors discussed the difference between Lutheran and Reformed doctrine, the proper distinction of Law from Gospel, and the home life of Martin Luther. Here in the U.S., we are impressed with the determination of the handful of young men who are applying themselves to learning God’s Word at our seminary in Eau Claire. Imagine the thrill when one looks out at a large room crammed with forty young men, all of whom are eager to deepen their knowledge of Scriptural doctrine, so that they can be pastors who are well-equipped for the
Lord’s service. 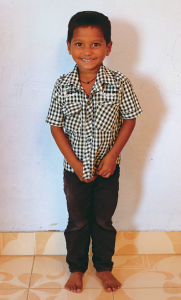 We took updated photos of all the students, so that we could share new pictures and information with their CLC sponsors here in the States. Then the children of the orphanage were brought in to have their photographs taken. A few were nervous and unsure about the process, but there were also plenty of radiant, beaming smiles from children who are obviously being well fed—both physically and spiritually—by the CLCI workers who care for them.

I came away from this experience with a profound sense of gratitude not only to the committee who sent me, missionaries Ed Starkey and Matt Ude who guided me, and the gracious Indian Christians who hosted me; but also and especially to the Lord of the Church. He it is who has laid this important work before us, and He it is who promises, “So shall My word be that goes forth from My mouth; It shall not return to Me void, But it shall accomplish what I please, And it shall prosper in the thing for which I sent it” (Isaiah 55:11).

For more pictures and information
from Pastor Naumann’s India trip, go to

Paul Naumann serves on the Project KINSHIP Committee. He is also pastor of Ascension Lutheran Church in Tacoma, Washington, and editor of The Lutheran Spokesman.