“This beginning of signs Jesus did in Cana of Galilee, and manifested His glory; and His disciples believed in Him” (John 2:11)

“Now that was a glorious sight!”

That’s what we might say after viewing a magnificent natural landscape or the star-filled sky on a clear night. Nature can be glorious because it is the handiwork of God (Psalm 19:1). Something of His divine glory shines in it, even if many who gaze in awe at the Grand Canyon do not acknowledge it. 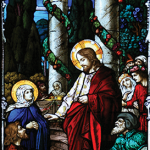 The glory of God that we see in His creation is that of His power and wisdom, and even His goodness to mankind (Acts 14:15-17). But His glory is also seen in His other attributes: that He is holy, just, all-knowing, present everywhere, and eternal. Furthermore, His glory is especially seen in His grace and love, which are revealed on the pages of Scripture.

In the season of the church year called Epiphany, we learn of the glory of God as it was revealed in Jesus. In His miracles, the almighty power of God was revealed in Him. By these acts of power it could be seen that Jesus was the Son of the living God. The first of these took place at the wedding in Cana (John 2:1-11), where Jesus turned water into wine. With this work Jesus “manifested His glory” by doing something that only God could have done. His disciples saw it and believed in Him.

But Jesus did not perform this work of power merely to impress. It was the “beginning of signs,” the first of many miracles that identified Jesus as the Christ, the promised Savior. It was not just in divine power that the glory of Christ was manifested at the wedding in Cana; it was in divine love. The miracle of transforming water into wine showed that here was God’s Son, who had come to suffer and die to rescue us all from our sins, from death and eternal damnation.

The glory of God shines especially bright in the cross of Christ. There we see how great His love is for us. It is a love that far surpasses all human love. Jesus directs our attention to this in His answer to His mother, Mary, when she tells Him that there was no more wine for the wedding guests. Before performing His first great sign, Jesus reminded Mary, “My hour has not yet come.” His hour was the time of His sacrifice on the cross (John 12:23, 27; 13:1). With this reference to His hour, Jesus tells us that He had not come to dazzle the world with works of power so that people would worship Him as God. He had come to demonstrate the glory of God’s grace and love so that people would believe in Him and love Him as Savior.

In the “Gloria in Excelsis” in the order of worship in The Lutheran Hymnal, we sing to God, “We give thanks to Thee for Thy great glory.” We not only praise, bless, worship, and glorify God for His great glory; we also give thanks to Him for it, for His glory is not just in His power, but also in His grace. It is not just in His holiness, but also in His love for us in Jesus Christ.

John Klatt is pastor of Prince of Peace Lutheran Church in Loveland, Colorado.