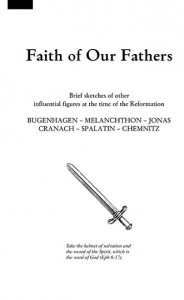 FAITH OF OUR FATHERS: Brief sketches of other influential figures at the time of the Reformation. Includes Bugenhagen, Melanchthon, Jonas, Cranach, Spalatin, and Chemnitz.

[These vignettes of men associated with Luther and the Reformation first appeared in connection with our CLC’s daily website devotions during Reformation season, 2013. Pastor David Schaller, Redeemer Lutheran Church, Sister Lakes, Mich., reports that the devotions were adapted from a Bible Class presentation, adding that “The original booklet and slides can be downloaded from our church website at http://www.redeemerclc.info/devotional.html — Go down the page until you see the ‘Faith of Our Fathers’ presentation.” – May the Holy Spirit bless our observance of this special season of the church year! — Editor]

FAITH OF OUR FATHERS (Second of four)

Some think that confessions of faith such as the Apostles’ Creed or the Nicene Creed are not necessary. They say things like, “We just follow the Bible; we don’t need to say anything more than that.” In reality, however, this is not workable. For Scripture says, “…Many false prophets have gone out into the world” (1 John 4:1).

It is often very important to judge what comes from a person’s mouth because there are so many false teachers who claim to “follow the Bible.” 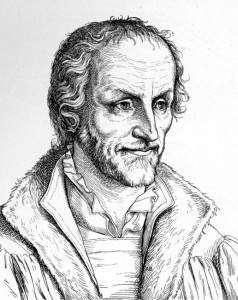 In 1530 Emperor Charles V invited the Protestants to a meeting at Augsburg. Some were hesitant to attend, suspecting deceit on the part of the Emperor, but a confession of faith was prepared by Melanchthon and was read aloud at the Diet of Augsburg on June 25, 1530. Known today as the Augsburg Confession, it has become one of the most important documents in the history of the Christian church. It is known especially for its fourth article which summarizes what the Bible teaches about faith and salvation:

“Also they teach that men cannot be justified before God by their own strength, merits, or works, but are freely justified for Christ’s sake, through faith, when they believe that they are received into favor, and that their sins are forgiven for Christ’s sake, who, by His death, has made satisfaction for our sins. This faith God imputes for righteousness in His sight. Rom. 3 and 4.” (Augsburg Confession, Article IV)

+ Series to be continued