Juan Ponce de Leon (whether he actually searched for the Fountain of Youth or not) will be forever remembered as the man who went on a futile mission. The search for eternal youth, whether in water or in an elixir of life, can seem pretty silly to us. Even the ancient Egyptians practiced the art of mummification in order to supposedly preserve the body for the after-life.

Today people are surely much more sophisticated and far too educated as to believe that such things could be found or thought to work, aren’t they?Read More »Fountain of Eternity

The Means of Grace

During the Age of Enlightenment in the 18th century an insidious philosophy – namely, rationalism — spread throughout Europe and America. Rationalism’s proponents asserted that human reason, unaided by divine revelation, is the sole guide to all attainable religious truth.

Human reason became the new god. The idea put forth was that if the human brain could not figure something out, it could not be true.

People began to turn away from the “other-worldly” focus of the Middle Ages toward the more worldly focus so prevalent in our day.

The Bible, however, speaks of a whole different concept of attaining truth.

The “carnal mind is enmity against God” (Romans 8:7). Without God’s Spirit, people walk in darkness, unable to find truth. “The natural man does not receive the things of the Spirit of God, for they are foolishness to him; nor can he know them, because they are spiritually discerned” (1 Corinthians 2:14).

Read More »The Means of Grace 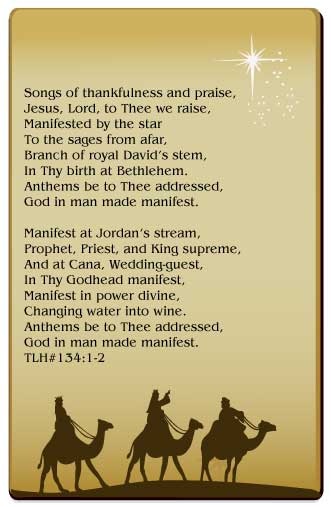 The Magi were “wise men” belonging to a priestly sect from the East. Contrary to what is often depicted, they were not present at Jesus’ birth. Rather, they followed a star to Jesus’ house and there knelt down to worship the “young Child” and presented Him with precious gifts from their homeland.Read More »On the 12th Day of Christmas…