[Ed.: The names of certain people and places in this article are withheld because of the risk of persecution.]

On our visit to Bangladesh in May, the Lord provided an incredible example of His grace, mercy, and patient blessings. After a couple of weeks of travel, teaching, and discussions, the trip was coming to a close, but the Lord had more blessings to give.

On our way back to Dhaka, Pastor M.B. and I attended worship services at three Bangladesh Lutheran Church Mission (BLCM) congregations. I was told there would be a few Baptisms, but I was unprepared for what I was about to witness, and the story of God’s grace behind it. Following the sermon, Pastor M.B. invited an older lady in the back of the church to come to the front for Baptism. As she made her way through the crowd of people sitting cross-legged on the floor, you could see that she was very emotional. By the time she made it to the front, she was sobbing and laid her head in the arms of Pastor M.B. and continued to cry. I later learned from Pastor M.B. that this woman had heard and resisted the Gospel of Jesus for several years. But in the past few months, she had begun to listen and ask questions and was finally brought to faith.

I can only imagine what this woman must have felt at that moment as she was about to have her sins washed away in the water and the Word of Baptism! Her whole life had been spent worshiping the idols of Hinduism. She had carried the burden of her sins as she tried hopelessly to follow the tenets of Hinduism, hoping to die and be reincarnated into a better station in life, based on her attempts to be a better person to affect her “karma.” But now, finally, she had come to know the love of Jesus and His sacrifice that had paid for her sins, given her a new life, and provided her with forgiveness, salvation, and an eternal home in heaven. All of this was His gift to her, not based on what she had done for God, but instead on His love for sinners and what His only Son had done for her and for all people on the cross! It’s no wonder she was filled with emotion and overcome with tears of joy on that day! I was overcome as well and couldn’t hold back my tears. They were tears of joy for this woman, and tears of praise for my Savior, and tears of gratitude for the privilege of being there to witness God’s grace and mercy in action. Praise God from whom ALL blessings flow!

Now, the back-story that led to this day. About ten years ago, Pastor M.B. was doing evangelism by riding his motorcycle out to rural villages in Hindu areas, going house to house, and talking to anyone who would listen to him tell them about their Savior Jesus. In a village several kilometers from where this BLCM congregation is now located, he met a carpenter taking a break from his work. They began to talk about Jesus. This carpenter wanted to know more, so Pastor M.B. returned the next day and shared more of God’s Word with him. They continued to meet whenever Pastor M.B. was in the area. Eventually, the carpenter was led by the Holy Spirit to repent of his sins, trust in Jesus, and rejoice in the forgiveness won for him on the cross. He became a believer! This man had been brought up by his parents as a practicing Hindu. His father had already died, but he wanted his mother and other family members to hear the truth of Jesus’ love for them. So, he invited Pastor M.B. to his family’s home. Neither Pastor M.B. nor the Gospel was well received. But the carpenter wanted his village and family to know Jesus, so he continued to invite Pastor M.B. back again and again. Others began to listen and wanted to know more about Jesus, so a small preaching station was started. Pastor M.B. visited often, and the carpenter would study with Pastor M.B. and then teach what he had learned to anyone who would listen.

Several Hindus in the area converted to Christianity, but not the carpenter’s mother. But remember how loving and patient and long-suffering our Savior is with us. Well, He was patient and long-suffering with the carpenter’s mother also. After more than ten years of hearing and resisting the Gospel, she was brought to faith and confessed Jesus Christ as her Lord and Savior just a couple of months ago. When others in the village and her family heard this, they became emboldened in their God-given faith and openly began to confess what they had been brought to believe about Jesus as well. More than twenty people received the washing of regeneration and the renewing of the Holy Spirit in the water and Word of Baptism on that day. And again, I can’t even think of enough words to describe the gratitude to my Savior for the privilege of being there to witness it. How do I even begin to give thanks for this privilege? I can only say, “Thank you, Jesus, for Your love in making this day possible through Your perfect life, sacrificial death on the cross, and resurrection from the dead!” I keep mentioning this woman’s joy, but imagine the joy of her son, the carpenter, whom God first used to bring the Gospel to this village! He is now serving as an elder and evangelist for the congregation. He will soon begin pastoral training with Pastor M.B. He had the privilege of holding the water for his mother’s Baptism; imagine the joy! God is so good to us!

What a privilege we have all been given to proclaim the Good News of our Savior Jesus wherever and whenever He provides the opportunity! 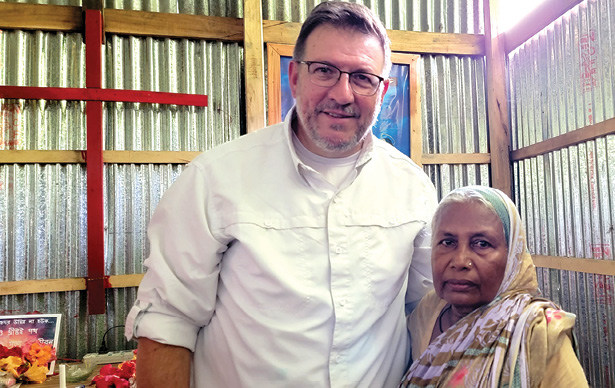 Above: Missionary Ohlmann and the carpenter’s mother.

Todd Ohlmann is a full-time visiting missionary for the Church of the Lutheran Confession.