“The Light of the World”

“The Light of the World!” That was the theme of the 35th Convention of the CLC. As we seek to carry on the work of God in this world of sin and darkness, it is tremendously reassuring to know that Jesus is the one true light. The brightness of His grace dispels the darkness of all our sins and failures, and even works them into His plan for good. Jesus also said to His disciples and to us, “You are the light of the world.” (Matthew 5:14) Christ’s light shines so brightly upon us that it reflects to the whole world.

Those two truths well summarize our CLC Convention. We are not just gathered together to slog through the work of the synod. We come together first to be enlightened and edified by Christ, our true Light. Then, filled with the light of Jesus’ love and desire for the salvation of sinners, we receive guidance to plan our joint work and return home with a renewed enthusiasm for carrying out God’s work of spreading His light in this world.

Christ’s light shone upon us in the various forms of worship. Every session of the convention began and ended with an edifying devotion and hymn reminding us that the light of Jesus atones for all our sins, and we are assured that the light of His grace never goes out even when we are unfaithful. President Eichstadt addressed the convention in the first session, reminding us that Jesus is our Shelter in every storm. Two uplifting essays were presented: Professor Mark Weis delivered the first essay Thursday evening, titled “Jesus, the Light of the World.” The second essay was presented by Pastor Cory Drehle, titled “You are the Light of the World.” Saturday morning began with a Memorial Service for those called servants who have received the final goal of their faith since our convention last summer. The service, conducted by Pastor Nathan Pfeiffer, was based on Jeremiah 29:11, reminding us that while things do not always work out according to our plans, God’s plans are always for our good and are always accomplished perfectly. Our convention worship culminated with a Saturday evening communion service. Pastor John Hein “tuned up” our hearts by reminding us how the Holy Spirit gave Zacharias a “tune-up” for his faith, turning his doubt to rejoicing in the fulfillment of God’s promise of a Savior, the “Dayspring from on high” Who would “give light to those who sit in darkness.” (Luke 1:78-79)

The worship at our convention is truly uplifting and inspiring. If you have never experienced the singing at convention, it is worth attending just for that!

The “Nuts and Bolts” of the Convention

The various boards of the CLC present their proposals for the coming two years. They are all contained in the Prospectus , which all delegates should read and familiarize themselves with before coming to convention.

The work of the floor committees is multi-faceted. Each committee considers tasks assigned to it from previous conventions, new items that the standing boards and committees have addressed to the floor committee, and any memorials submitted to the convention by individuals or congregations. As a result, a report is prepared for presentation to the convention. That report will usually contain recognition of and thanks for God’s blessings upon the work of the synod, reports regarding the assigned areas of committee responsibility, and resolutions for actions to be taken by the synod. These reports, including any resolutions, are then read to the whole body on the convention floor. At that time, the committee responds to any questions about the report, and the delegates and pastors may make edits or alterations, as well as passing or not passing the resolutions. Sometimes a part of the floor committee report is referred back to the committee for further consideration.

Interspersed between committee reports, the election of officers takes place. This year’s election results are as follows:

Board of Missions: Pastor Nathanael Mayhew and Mr. Joel Krafft

Board of Regents: Mr. James Burkhardt and Pastor John Hein

Board of Trustees: Mr. Tom Lentz and Professor Jeff Schierenbeck

Important Resolutions Christ’s light was guiding our hearts and minds and presented many opportunities and challenges in the work laid out for us. The resolutions were as follows:

One of the most important matters for this Convention to deal with was responding to the two directives from the 2021 convention, directing the Board of Doctrine together with the Joint Committee who was meeting with the Wisconsin Evangelical Lutheran Synod (WELS) and the Evangelical Lutheran Synod (ELS) “to address additional questions in our midst (e.g., role of admonition, prerequisites for settlement, the practice of the fellowship principle, [and] the dangers expressed by Romans 16:18).” (2021 Proceedings, pg. 125)The second directive was for these same men to “clearly define what is necessary for a settlement of the doctrinal difference between the CLC and the WELS and ELS concerning the termination of fellowship.” (2021 Proceedings, p.125)

The Board of Doctrine and Joint Committee answered this directive with a two-part document addressing these questions. The Board of Doctrine also presented a set of theses and antitheses meant for study titled “ What Scripture Teaches Regarding Admonition and Termination of Fellowship, ” since that is the heart of the difference that has divided us from the WELS and ELS.

This convention responded by saying, “We support the overall content of Part One of the ‘Report from the CLC Board of Doctrine and the Joint Committee Representatives, on Church Fellowship and its Termination.’” They then asked the 2023 General Pastoral Conference to study Part One of the joint report and the theses and antitheses, directing that the results of this study be reported to the 2024 Convention.

This Convention acknowledged that there are differing opinions as to whether talks should continue with the WELS and ELS and, if so, how they should proceed. Part Two of the Joint Committee and Board of Doctrine’s report dealt with what is necessary for a settlement of this particular doctrinal difference with the WELS and ELS. The Board of Doctrine and the Joint Committee presented three areas that are necessary to determine whether true agreement exists.

The convention agreed that “these three points are necessary and sufficient for genuine agreement on this doctrine.” Therefore, it was resolved “that the CLC President, in conjunction with the Joint Committee and the Board of Doctrine bring the three points outlined on p. 30 of the Prospectus to the WELS and ELS to see if they are willing to accept them,” and “that if they are not willing to accept them, we direct that the current formal intersynodical discussions cease.”

The Lord has truly presented us with many amazing opportunities and open doors for mission work around the world. We thank the Lord for all of our mission fields and for the new contacts that are being explored and pray for the strength and resources to meet the growing needs in our missions.

We are thankful that with COVID restrictions being lifted around the world, our Board of Missions is able to resume calling a third foreign missionary and pray that the Lord will lead an individual to fill this position.

Committee on President’s Report and Board of Education & Publications (# 1)

The Board of Education and Publications (BoEP) oversees the production of the CLC publications Daily Rest, the Lutheran Spokesman, the Journal of Theology, and the Ministry by Mail, as well as maintaining our CLC websites and the CLC Book House. Since the world is increasingly communicating news via social media and other online sources, the convention encouraged “the BoEP to put more focused work into expanding our online presence beyond our websites in new and thoughtful ways.”

The convention approved of the BoEP’s plan to produce a revision of the Sydow Catechism and Workbook. They are to appoint a committee to work on such a revision.

In the spirit of the 2021 CLC Convention, which resolved that the Board of Missions encourage Christian day schools in subsidized congregations, the convention wanted to more actively promote the opening of Christian day schools and recognized that “this area of Gospel ministry constitutionally fall[s] under the already assigned duties . . . of the CLC Board of Education and Publications.” They therefore resolved “that a Committee for Christian day schools, to serve under the supervision of the BoEP, be appointed by the CLC President to assist the BoEP in the work of exploring and developing a new program for the establishment of new Christian Day Schools along with encouragement and further support and development of already established Christian Day Schools who request assistance in their work.”

In order to fund such support, the convention resolved “that we establish a Fund for Christian Education to be administered by the CLC Board of Trustees at the direction of the BoEP and for the purpose of assisting CLC congregations in the establishment of Christian Day Schools.” This new fund was started with $4000 from the CLC Foundation, which was dissolved.

The 2006 Convention adopted a budgeting policy that limited the increase in tuition and room and board to $50 per semester each. This has accomplished the goal of keeping the student cost to a minimum, but with the considerable drop in enrollment since 2006, the expense of ILC has become an increased burden on the CLC budget. Therefore the 2006 policy was removed, and the Convention encouraged the Board of Regents to use the endowment funds to keep the student out-of-pocket cost to a minimum, while still providing for professors and staff and maintaining the campus.

“RESOLVED that we approve the ILC Planning Committee’s design concept and plan to construct a new gymnasium and Chapel/Fine Arts building.”

“RESOLVED that we approve a three-million dollar 30-year loan from the CEF at 2.5% interest.”

“RESOLVED that we direct the building committee, in coordination with the contractor, to begin construction when the needed funds to complete the project have been secured.”

“RESOLVED that the Board of Trustees study the feasibility and potential value of the sale of the ILC campus parcel south of Lowes Creek, including ways of ensuring that any future developments on that parcel would not interfere with the use of the remaining campus.”

A total budget of $2,065,960 was approved. This includes an 8% COLA (Cost of Living Adjustment) increase for our called workers to keep up with inflation. The budget breaks down as follows:

Committee on Membership and Constitution (#6)

It was reported that 154 total voting members were present at this year’s convention, consisting of 73 lay delegates, 29 teachers and professors, and 52 pastors. We thank all the delegates who dedicated their time to the work of the CLC and praise the Lord for granting all safe travels to and from the convention. Statistics imply that the Thursday-to-Sunday time frame makes it easier for lay delegates to attend, therefore the next convention was scheduled for Thursday through Sunday, June 20-23, 2024.

Consider attending the next CLC Convention—it truly is an enlightening experience! 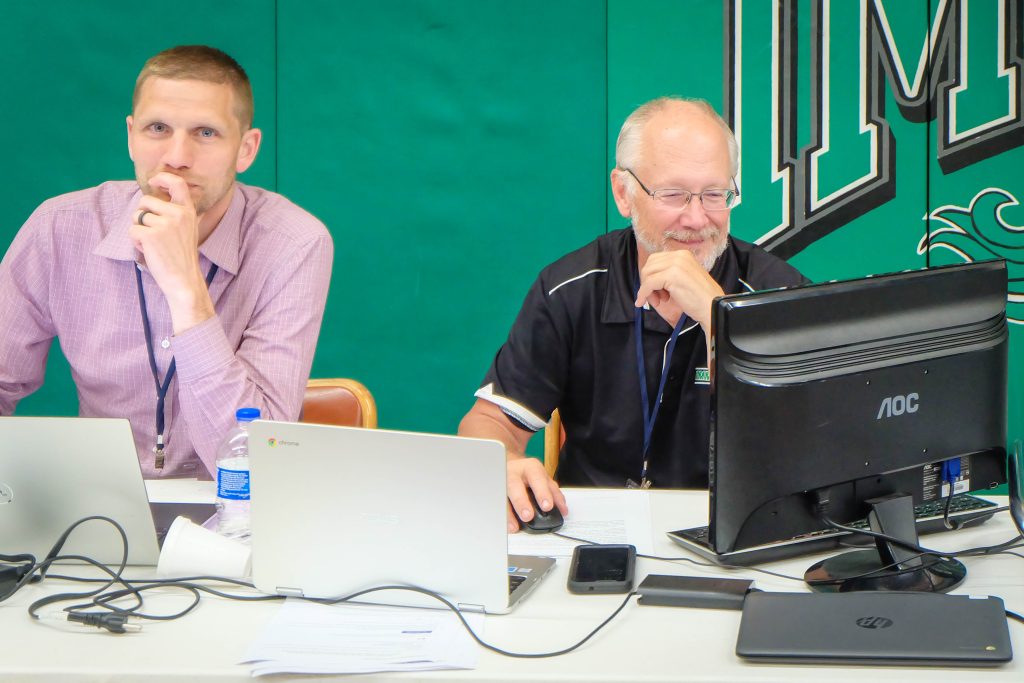 Floor sessions met in the fieldhouse of Immanuel Lutheran College. 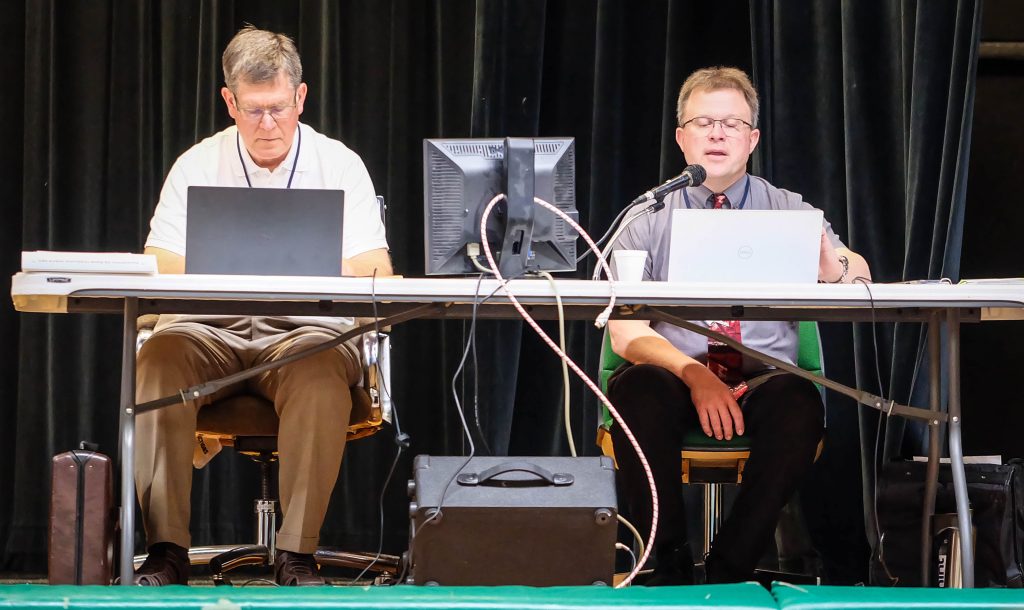 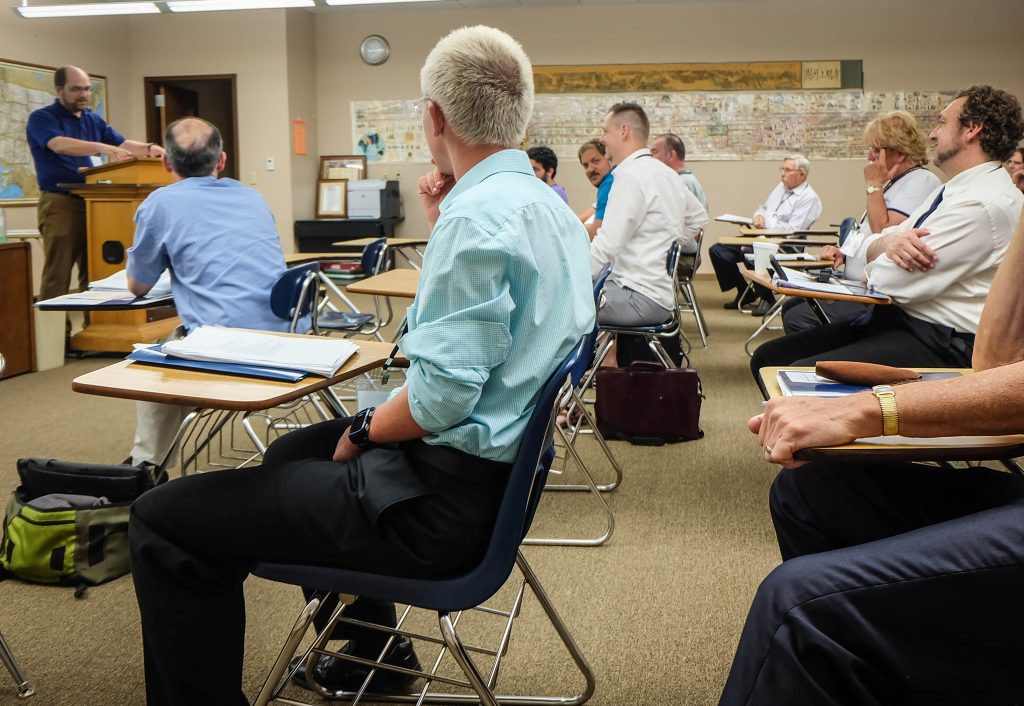