Every Bible student has heard of the Tower of Babel. Tourists are fascinated with the Leaning Tower of Pisa. Historians know of the Lighthouse of Alexandria, one of the wonders of the ancient world. As for twin towers, the Petronas Towers of Kuala Lumpur were initially the tallest towers in the world, and are the tallest twin towers still standing. Not so the World Trade Center towers of New York, brought down by terrorists on 9/11. Whether out of pride, bragging rights, or perhaps economy of usage, men do build their towers.

Thus we are not surprised to hear of two notable towers built by Solomon. The king assigned Huram to cast two bronze pillars, with bronze capitals set on top (1 Kings 7:15-22). The overall height of each pillar was approximately thirty-two feet, with a circumference of eighteen feet. Estimated weight of each pillar: 16-20 tons. Each pillar was erected at the portico of the temple in Jerusalem. So the first thing the people would see as they came to the temple of the Lord was those two enormous towers with their ornate capitals. Eye-capturing indeed! 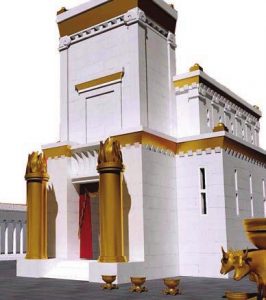 Yet the pillars were not merely decorative, nor were they load-bearing. But each pillar had a name – a name with great significance. The name of one was Jachin, which means “He has or will establish.” The name of the second was Boaz, meaning “In him is strength.” In context, this can refer to none other than the Lord God Himself.

What a visual sermon for every Jewish worshiper. God created the universe, and established all things in it. Later He established with Abraham a covenant of grace, making from him a great nation and the father of all believers. He then established His beloved Israel in their promised homeland of Canaan. And He swore unto David, Solomon’s father, that through him and his Seed, He would establish an everlasting kingdom of grace and glory, which would include people of all nations.

So the Lord could establish, because “in Him is strength.” Indeed, the ancient Jews had seen and experienced that strength at work for them many times—the miracle of the Red Sea crossing, manna from heaven, water from the rock, victories over and deliverance from their earthly enemies. Surely God was their strength, and not they themselves.

But more! All the Old Testament Gospel pointed ahead to the day when God’s own “Tower” would come from heaven to destroy the works of the devil, overcome the world, and so save sinners. That took great grace and strength; strength to defeat the temptations of the Deceiver, strength to live a sinless life to earn our righteousness, strength to redeem the world and atone for all sin with His precious blood. Every day the two temple towers—Jachin and Boaz—testified that God establishes, for in Him is strength. Every day the worshipers were to see and remember, believe and be encouraged.

Like the Twin Towers, the two pillars of Solomon’s temple no longer stand. They were cut up and carted off by Nebuchadnezzar centuries ago. But can they still stand? The Old Testament temple is long gone, but God has his New Testament building project—for each believer in Christ is a temple built by the Holy Spirit.

Can Jachin and Boaz still stand? By faith they can stand in the portico of our hearts. Thus every day we can pull up their image in wonderment. Ahead of us stands Jachin—the Lord establishes! He protects and keeps us on the Jesus Way, and establishes our resurrection bodies and mansions in heaven. He does so because He is Boaz—the eternal God with unlimited strength and grace. So close your eyes. Envision the Twin Towers of God. They still stand for our salvation and will forever.

David Fuerstenau is a retired pastor. He lives in Eau Claire, Wisconsin.