In this series, thoseinvolved with CLC foreign missions profile one aspect of our overseas endeavors. 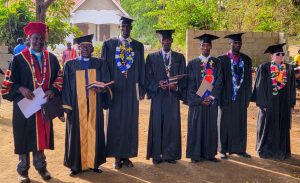 On November 14, 2021, five graduates, three faculty members, one missionary, and about one hundred guests and government dignitaries gathered for the inaugural graduation of five students who successfully completed three years of study at the Wittenberg Lutheran Theological Seminary of the CLC-Tanzania.

This graduation was a long time in the making. It all began when the CLC responded to an opportunity to assist in proclaiming the Gospel in Tanzania back in 2000. Financial assistance was approved and sent to the Lutheran Church of East Africa (LCEA) to start St. Peter’s Seminary. During these early years of our work in Tanzania, a crew of CLC Mission Helpers traveled to Himo, Tanzania, to help purchase and remodel a building for use as a seminary facility with classrooms, dormitory, offices, and a large garden plot. It wasn’t too many years later that greed and deception among a few LCEA leaders led to a break in fellowship and the end of the CLC’s involvement in and support of the seminary.

Over the next few years, Tanzanian church leaders and pastors who remained honest and faithful to the Scriptures continued to work with the CLC to train pastors and evangelists. For various reasons, these efforts did not go well, and subsidy to Tanzania was eventually suspended until church leaders came up with an organized plan to continue the work in a decent and orderly way.

Within just a couple of years, a small number of faithful church leaders decided to reorganize and register with the government a church body called the Church of the Lutheran Confession of Tanzania. With a constitution written and approved by CLC missionaries, registration paperwork was filed with the appropriate government offices, and the leaders of the newly formed CLC-TZ began making plans to restart a pastoral training program.

On the outskirts of Arusha, in the village of Ambureni, land and a church building were officially and legally donated to the CLC-TZ for a new seminary. Funds were raised, and a modest building with four dormitory rooms was constructed. A faculty of four pastors was chosen to teach on a rotating basis as they continued with their full-time pastoral duties. With a financial grant from the CLC Mission Development Fund (MDF), books were purchased and necessary improvements were made to the existing church building for use as a classroom during the week.

The CLC-TZ has four districts in different parts of the country. Each district has a different climate and, therefore, the districts produce different products and resources. Each district committed to supplying food items for the students attending seminary. For example, the Arusha district is known for the climate and soil necessary to grow abundant bananas and vegetables, so they committed to supply unlimited bananas and vegetables to the seminary. The Maasai tribes are known for their livestock and grains, so the Ruvu district donated maize and goats. The Tanga district is more tropical in the low-lying coastal region, and they committed to donations of rice and fruits.

With all of these plans in place and students ready to begin their studies, a request was made and approved for CLC-Kinship Seminary Student support. Sponsors were found, and classes began in January of 2018. Thankfully, the pandemic didn’t seem to slow things down much in Tanzania, and classes continued mostly uninterrupted, so that graduation could take place on schedule.

Ten new students are enrolled in the seminary and began classes at the end of January, 2022. A few changes have been made with this new cohort of students by adding one year of pre-seminary classes to the program. This newly added first year of classes will focus on an introduction to Christian Doctrine, Old and New Testament studies, evangelism, and an intensive course in English. At the end of the one-year pre-seminary course, each student will be evaluated and either move on to the three-year seminary course or conclude their studies and receive a certificate of completion and approval for service to the CLC-TANZANIA as an evangelist.

Another change for the seminary is the addition of a full-time instructor and academic dean. A house has been rented near the seminary, and arrangements for a monthly stipend have been made so that one of the faculty members can step down from his pastoral duties to be fully dedicated to teaching and to the administration of the seminary. This is a big step for the CLC-TZ as they have prayed for and expect the Lord’s blessings as they dedicate more time and resources to training more men to be faithful preachers and teachers of God’s saving Word.

Another exciting aspect of the seminary is the Lord’s provision in bringing more young men from the Maasai tribe to train as pastors. The CLC-TZ has focused much of its evangelism efforts among the Maasai in recent years. The Lord has blessed these efforts with several new Maasai congregations and preaching stations. Three of the five recent graduates are Maasai, and four new students are also from this tribe. This is exciting, as these men will have opportunities to take the Gospel to many unreached Maasai bomas and other more primitive tribes such as the Hadza, who live in some of the same areas. 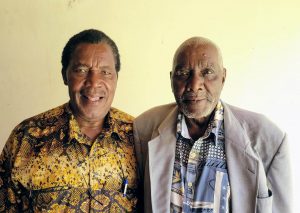 There have been many ups and downs, setbacks, and disappointments over the past twenty-one years during which the Lord has allowed us the privilege of assisting in the spread of the Gospel in Tanzania. Yet the Lord has remained faithful to His promise to bless the faithful preaching and teaching of His saving Word. Please pray for the members and church leaders of the CLC-TZ as they continue to support and labor in this effort to train more pastors and teachers to teach and preach God’s Word faithfully. And rejoice in the privilege of joining in this important work through our support, encouragement, and prayers.

Todd Ohlmann is a full-time visiting missionary for the Church of the Lutheran Confession. 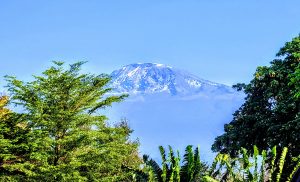