Items of interest from various sources of religious news and opinion, in print and on the web.

Bureaucrats OK Abortion by Mail. On December 16th the U.S. Food and Drug Administration issued a regulation allowing women to receive the at-home abortion drugs mifepristone and misoprostol by mail, removing the longstanding requirement for an in-person consultation before the drugs could be dispensed. Women can now get a prescription for the abortion pills via teleconference with a doctor in any state, and then receive the drugs by mail. The move is considered something of a formality, since the FDA decided in April “not to enforce” the in-person rule owing to COVID. Abortion advocates hailed the move and called for further loosening of restrictions. Pro-lifers, meanwhile, objected that the decision was too important to be left to unelected bureaucrats, and would have far-reaching adverse health effects on women. Jeanne Mancini, president of the March for Life Education and Defense Fund, said the decision “will lead to more lives lost to abortion, and will increase the number of mothers who suffer physical and psychological harm from chemical abortions.” Perrone, Matthew. “US Regulators Lift In-Person Restrictions on Abortion Pill.” Health News. USNews.com, 16 Dec. 2021. Web. 24 Dec. 2021.

Polls Showing Religious Decline May be Skewed. Much has been made in recent years of polls, especially from Pew and Barna, showing a sharp decline in religious affiliation in the U.S., and a corresponding jump in those who claim no affiliation (the “nones”). Columnist Thomas Kidd of the Acton Institute, however, advises taking these results with a grain of salt, for several reasons. In the first place, he says, the percentage of people who actually respond to polls is very small. “Polls are asking questions only of people who respond to pollsters. . . . National surveys are no longer a truly representative sample of the American people, especially in the post–landline phone era.” Secondly, “a question like ‘What is your religion?’ can be construed in many different ways. For instance, small but significant numbers of people with ‘no religion’—some studies suggest as high as 10% of them—actually attend religious services at least monthly.” Finally, says Kidd, “both secular media outlets and Christian research firms such as Barna have a vested interest in promoting the narrative of American religion’s collapse. . . . Secular folks in the media may enjoy reporting on religion’s downfall, if it means that the world is finally becoming awakened to the folly of faith. But Christian traditionalists have a strange affinity for that narrative, too. . . . Christians are familiar with hearing sermons about how the rising generation is not as godly as their forefathers were.” Kidd, Thomas. “Take recent polls about COVID hastening the demise of American religion with a grain of salt.” Powerblog. Acton.org, 21 Dec. 2021. Web. 23 Dec. 2021. 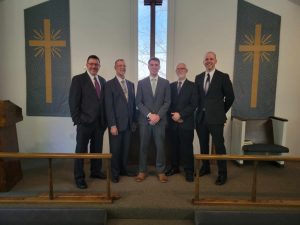 Installation. In accord with our usage and order, Samuel Rodebaugh (center), who was called by Faith Lutheran Church, Manchester, Missouri, to be its pastor, was installed on January 23, 2022. Participating were (l-r) Missionary Todd Ohlmann, congregational chairman Leonard Benter, Professor David Rodebaugh, and Pastor Neal Radichel, who officiated. 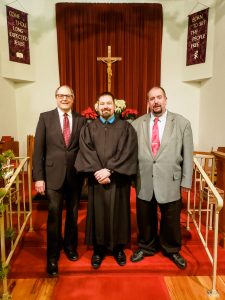 Installation. In accord with our usage and order, Benjamin Libby (middle) , who was called by Redeemer Evangelical Lutheran Church, Cheyenne, Wyoming, to be its pastor, was installed on December 5, 2021. Also participating in the service was Pastor Thomas Schuetze (left).—Pastor Timothy Wheaton