“The Number of the Disciples Multiplied Greatly!”

In this series, those involved with CLC foreign missions profile one aspect of our overseas endeavors.

Three times in Acts there are indications as to the growth of the church as the Word went forth. There is the title of this article from Acts 6:7. It is the Word in hearts that grew and multiplied. (Acts 12:24, 19:20)

In the Berea Evangelical Lutheran Church (BELC) in India we have seen this as their fortieth anniversary is celebrated in December. Souls served with the Word who then profess their faith in Jesus is what has happened. The BELC began in 1981 when Pastor Bas withdrew from the IELC. We see God’s work over forty years as we contemplate the following statistics: 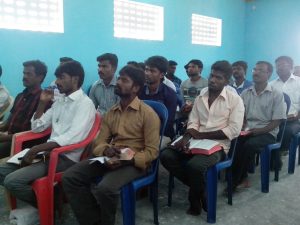 Our joint work with the BELC began in 1983 and was reported in the CLC Convention of 1984. The work is divided into districts of the church. In 2007 there were fourteen districts, and now there are twenty-five. These are not dry statistics, but evidence of the power of the Gospel of Jesus Christ and the work of the Holy Spirit. And when we look deeper into the numbers we see that our pastors in these districts are working to spread the Word in many villages where there is no other Christian witness. One district started in 2006 had eleven men serving, with seven of them working in villages with no Christian church. One district that was opened in 2013 had seventeen pastors, of whom eleven were preaching in villages where there was no other church. Another district started in 2007 had thirteen men serving in that many villages where they were the only church. Repeated down through the years, this is more than just people leaving another church to join the BELC; rather, it is an extensive reaching out to those in unbelief. And the BELC leadership has made consistent efforts to expand. The Word of the Lord grows.

The devil was not pleased with the growth of numbers and faith in Jesus. The following was reported to the 2002 Convention:

“Our overseas work in India was dealt a major blow with the revelation that Pastor Mohan Bas of the BELC had been dealing deceitfully with us, for a number of years. Pastor Bas has been the chairman of the BELC since its beginning. He has also served as the dean of the Martin Luther Bible School, as well as the administrator of the children’s home. Without our knowledge, Pastor Bas began to make contacts with another Lutheran church.”

Despite the efforts of the devil, this “disaster” was turned into good by our Lord when nearly all the pastors and congregations of the BELC chose to remain in fellowship with us, professing that they knew nothing of this and that it was wrong to do this. Within the BELC, proper discipline has had to be exercised even to the point of excommunicating one of the seven district chairmen in the past.

The Mission Board reports to us regularly on our sister churches and the joint work we carry out with them. Most recently it was reported that the BELC had 888 pastors, 999 congregations, 354 preaching stations, and 21 pastors in training at the Bible Institute. What a wonderful number of things to celebrate after forty years of God’s grace and guidance! The Hindu nationalists continue to persecute Christians in India. Some of the Indian states have passed anti-conversion laws. Yet the Gospel banners forward go.

David Koenig has served as a foreign missionary in Africa, India, and elsewhere. Though officially retired, he continues to be active in the synod’s mission endeavors.

[Editor’s note: in the report the names of certain people and places have been withheld because of the risk of persecution.]