Updates from congregations around the Church of the Lutheran Confession. 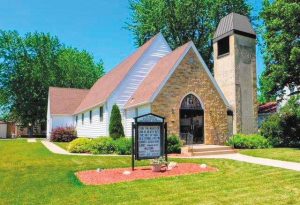 Right along Highway 54, which runs through the middle of downtown Melrose, Wisconsin, stands St. Paul’s Lutheran Church. The congregation dates back to 1902 when Pastor William Parisius of Christ’s Evangelical Lutheran Church (WELS) in Burr Oak, Wisconsin, began holding services for a number of German Lutheran families living in Melrose.

In 1923, Pastor Martin A. Zimmerman was called to be pastor of this dual parish of Burr Oak and Melrose. Around this time, a controversy broke out in the WELS which came to be known as the Protes’tant Controversy. In 1924, Pastor Zimmerman resigned from the WELS due to the controversy, but his resignation was not accepted and he was ousted instead. The churches at Burr Oak and Melrose were subsequently suspended from WELS for retaining Zimmerman as pastor. The dual parish became affiliated with the Protes’tant Conference in 1928.

St. Paul’s operated for fifty years without a church building, renting various places to hold worship services, usually the Methodist Church in town. In 1949, the congregation voted to begin construction of a church building. In January of 1952, the congregation held its first services in the unfinished structure, which would finally be fully completed in the summer of 1953. It is a beautiful building inside and out, complete with a bell tower that contains the Luther seal.

In 1961, Pastor Zimmerman retired from the ministry and the parochial school teacher for the dual parish at that time, Marcus Albrecht, was called to be the new pastor. Although serving as teacher, Albrecht was also trained to be pastor at WELS seminary. He served the congregation faithfully from 1961-1991. In 1991, Pastor Floyd Brand was called to be pastor. In 1994, the church at Burr Oak terminated Pastor Brand’s call and rejoined the WELS, while St. Paul’s retained Pastor Brand as their pastor. After Pastor Brand’s retirement in May 2017, St. Paul’s continued by having lay services using audio sermons of Pastor Brand, which they played over their PA speakers during the service.

In April 2020, at the onset of the COVID pandemic, a member of St. Paul’s came across the Palm Sunday service of Redeemer Lutheran Church in Cheyenne, Wyoming, that was posted on Facebook. CLC Pastor Chad Seybt mentioned in that sermon a collection of devotions he had written on COVID-19, and the contact from Melrose reached out to Pastor Seybt requesting a copy of those devotions. She and her husband subsequently shared them with the members of St. Paul’s, who in turn shared them with their friends and family members.

Shortly afterwards, Pastor Seybt was asked if he would be willing to share audio versions of his sermons for St. Paul’s to use in their worship services. After learning that the congregation was without a pastor, Pastor Seybt agreed to do so. In the meantime, the Melrose contact and her husband also began taking instruction classes with Pastor Seybt to learn more about the CLC.

In August, 2020, Pastor Seybt was called to serve the tri-parish of CLC churches located in Fairchild, Millston, and Onalaska, Wisconsin. By this point, there were more members of St. Paul’s who were investigating the CLC on their own. Shortly after Pastor Seybt accepted the call to serve the tri-parish in Wisconsin, the members of St. Paul’s sent a letter to President Eichstadt formally requesting information on the teachings of the CLC. After a series of meetings with Pastor Emeritus John Schierenbeck and Pastor Chad Seybt, St. Paul’s Lutheran Church found themselves in agreement with the CLC, and on Palm Sunday 2021, exactly one year from their first contact with Pastor Seybt, St. Paul’s voted to seek membership in the CLC.

In May 2021, St. Paul’s called Pastor Chad Seybt to serve as part time pastor for the congregation. Pastor Seybt accepted the call almost four years to the day that St. Paul’s former pastor retired. At the June 2021 Convention of the Church of the Lutheran Confession, St. Paul’s Lutheran Church was formally received into membership status in the CLC.

St. Paul’s is an older congregation, even having several members in their 90’s and 100’s. Many last names of the congregation are the same as those mentioned in the membership roster of those first meetings in 1902. They are very grateful to have a pastor now after going without one for four years, and are most eager learners of God’s Word. They enjoy being able to gather around the preaching of God’s Law and Gospel. They do not all file out after the service as is the custom of some churches, but rather many members will often stay and sit in the pews to chat about the service and sermon. The members of St. Paul’s are happy to be blessed with the fellowship in the CLC and the support they have already received.

The faithfulness of St. Paul’s Lutheran Church having lay services for four years waiting and hoping for the Lord to provide a pastor is a testament to God’s promise in Psalm 27:14, “Wait on the Lord; be of good courage, and He shall strengthen your heart; wait, I say, on the Lord!” They waited; the Lord provided. The way St. Paul’s found fellowship with the CLC among the challenges of the COVID pandemic is a testament to God’s promise in Romans 8:28, “And we know that all things work together for good to those who love God, to those who are the called according to His purpose.” Only the Lord Himself could plan such things as what happened with St. Paul’s congregation over the course of the past two years. Christ continues to build and provide for His church, even in the midst of a pandemic. Jesus, our Savior, never leaves us and saves to the uttermost. “Thanks be to God for His indescribable gift!” (2 Corinthians 9:15)

If you are ever in the Melrose, Wisconsin area, you are invited to come meet your new brothers and sisters in the CLC. We worship at 1:30 P.M. on Sundays.