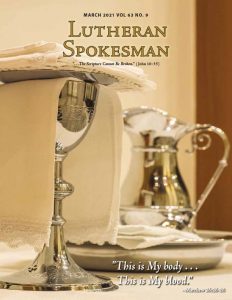 The devil had a dilemma. In the Lord’s Supper, God had just bequeathed to mankind a gift that held the potential to cripple the devil’s plans for mankind’s eternal destruction. Perhaps man didn’t yet realize the power of the gift, but Satan did, and he immediately set to work. What he needed was an ongoing disinformation campaign—obviously—since the truth would continually remind God’s children of the Gospel itself, and against that Gospel Satan knew he was powerless. So Satan initiated a disinformation “campaign of opposites.”

The first phase of his campaign was to promote the idea that what Jesus had instituted in the upper room on Maundy Thursday was not a gift but a requirement—not something God would do for man, but something man must do for God—Law, not Gospel. Anything but Gospel. And it worked, as even those who called themselves Christians came to regard this “Lord’s Supper” as something that they would offer to God as, at minimum, a partial payment for their sins, something they must do to pay down on their sin debt.

The plan worked well until God raised up men like Martin Luther and Martin Chemnitz, through whom He restored the truth of the Gospel itself: Jesus has already paid, in full, for the sum total of all mankind’s sins. A sinner is not saved by doing, but through faith in the fact that Jesus has already done all that is required.

The devil had to adapt. He didn’t abandon the original part of his plan, since it was still wildly effective in many circles. Instead, he added a second phase or parallel attack—a new “opposites plan” designed to replace God’s intended peace and comfort with terror and uncertainty. This new plan was designed for those who already knew that Jesus alone could provide any sin payment, and his remedy was diabolically clever: convince mankind that their forgiveness is not continuously full and complete when saving faith is present. It is, rather, parceled out only occasionally—in installments—and only when man does what he must do to activate the installment. The plan was to create the false impression that sin accumulates in a Christian’s life, like garbage in a trashcan, to be removed only periodically. This was spiritual terrorism, as those who looked to Jesus alone for forgiveness came to imagine that they walked about through life with an accumulating debt of sin, a debt that was paid only periodically, which then began to accumulate again almost immediately. Comfort and peace were replaced by terror and doubt, as salvation became a most doubtful proposition. Would my time of grace end with unforgiven sins still on my account, or would I be fortunate enough to die right after the garbage of my sins had been picked up and carried off? If forgiveness is only occasional, the odds are grim, at best.

The natural result of Satan’s second disinformation campaign was both tragic and predictable. Terrified sinners again turned inward for the solution. I must do something. I must continually ask God for forgiveness. I must go to communion. I must struggle to overcome all temptation. I must leave this earth with words of repentance on my lips. Only then will full forgiveness be mine.

Yet what exactly was it that Jesus actually bequeathed to His children on Maundy Thursday? He did not leave us in doubt: “This do in remembrance of me.” “Remembering Jesus” means remembering that He paid mankind’s sin debt, once and for all, on Calvary’s cross. It means remembering that forgiveness and eternal life are our personal possession every moment that saving faith resides in our hearts. Faith is credited as righteousness. We are not washed clean occasionally; we exist every moment as God’s pure and holy saints, by grace, through faith. 1 Corinthians 6:11 assures us not that we are being washed, but that we have been washed, sanctified, justified. As a special reminder of the uninterrupted forgiveness that is always ours, He gives us His true body and blood in the sacrament—the very body and blood that earned that forgiveness two thousand years ago, once and for all.