Both Shepherd and Lamb

Jesus was many mutually exclusive things that, humanly speaking, He couldn’t be. He was the God of Sabaoth, and He was the Prince of Peace. He was Lord and Master, and He was the humble Servant. He was “true God, begotten of the Father from eternity,” and He was a mortal man Whose life left Him on Calvary’s cross. He was also both Shepherd and Lamb. 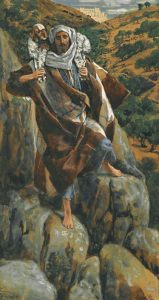 We get this, of course, but it is nonetheless remarkable when you actually take the time to consider it. That both are true is beyond dispute. Jesus once said this of Himself: “I am the good shepherd. The good shepherd lays down his life for the sheep. He who is a hired hand and not a shepherd, who does not own the sheep, sees the wolf coming and leaves the sheep and flees, and the wolf snatches them and scatters them. He flees because he is a hired hand and cares nothing for the sheep. I am the good shepherd. I know my own and my own know me, just as the Father knows me and I know the Father; and I lay down my life for the sheep.” (John 10:11-15 ESV) Clearly then He is a shepherd. Yet John the Baptist, on two separate occasions, identified Jesus as “the Lamb of God.” (John 1:29, 34)
Nor was either “job description” a temporary position. He was both and He is both. He wasn’t just our Good Shepherd for a time; He still is. Even now He is also, according to what the Apostle John saw in the Revelation, the Lamb that reigns in heaven: “And between the throne and the four living creatures and among the elders I saw a Lamb standing, as though it had been slain, with seven horns and with seven eyes, which are the seven spirits of God sent out into all the earth. And he went and took the scroll from the right hand of him who was seated on the throne. And when he had taken the scroll, the four living creatures and the twenty-four elders fell down before the Lamb, each holding a harp, and golden bowls full of incense, which are the prayers of the saints. And they sang a new song, saying, ‘Worthy are you to take the scroll and to open its seals, for you were slain, and by your blood you ransomed people for God from every tribe and language and people and nation.’” (Revelation 5:6-9 ESV)

John then went on to describe how Jesus remains both of those two seemingly mutually exclusive things for all eternity: “For the Lamb in the midst of the throne will be their shepherd, and he will guide them to springs of living water, and God will wipe away every tear from their eyes.” (Revelation 7:17 ESV) Jesus was, and is, both Lamb and Shepherd. He was and is, in other words, both a sheep and the One who protects the sheep.
Both speak to His character. Both identify the perfect love that He had and has for every single one of His sheep. “Lamb” and “Shepherd” simply identify different facets or aspects of His love, as they also identify our need. We needed a perfect, divine sacrifice to pay our sin debt, as we also need a Good Shepherd to protect and provide for us, because we are just sheep. We are incapable of any sacrifice that would cancel our sin debt. Having been redeemed by the sacrifice of the Lamb, we are also incapable of caring and providing for ourselves. We would do well to remember this as we celebrate Good Shepherd Sunday. Our Good Shepherd was not just willing to give His life for the sheep, He did just that. The Shepherd was also the Lamb.
Michael Roehl is pastor of St. Paul Lutheran Church in Bismarck, North Dakota.