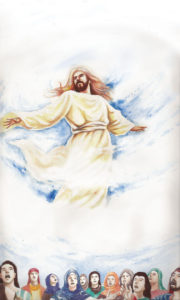 Lutheran theologian A.L. Graebner wrote of Christ’s ascension into heaven that it was “the glorious termination of His visible conversation with His church on earth” (Outlines of Doctrinal Theology). Writing in 1898, he was using the word conversation in the older sense of interaction. During His time in this world, especially during His three-year public ministry, Christ interacted visibly with His fellow human beings. Also after His resurrection, He appeared visibly to His disciples and spoke to them during a period of forty days. But then He was taken up into heaven as His disciples watched, and a cloud received Him out of their sight. After that there were only a few extraordinary appearances of Christ such as those to Paul (1 Corinthians 15:8) and John (Revelation 1:10-18).

But wasn’t Christ’s time in this world also a conversation in the sense in which we use the word today? In His ministry as recorded in the four Gospels, Christ engaged His people in a three-year conversation. That was a conversation that was truly unique, in which the only begotten Son in the bosom of the Father declared to man the unseen God.

And it was a true conversation; it wasn’t only a series of speeches or monologues. Jesus answered the questions and responded to the concerns of those who approached Him. He talked to Nicodemus when he came to Jesus by night. Jesus also initiated conversations. He turned to two disciples who were following Him and asked, “What do you seek?” He struck up a conversation with the Samaritan woman at Jacob’s well by asking her for a drink of water. And these were momentous, life-changing conversations. Nicodemus, the Samaritan woman, and the first disciples all became believers in and bold confessors of the Lord Jesus.

You and I have the privilege of listening in on these conversations of the Lord Jesus. And as we listen to them, we find that what He says there is addressed to us, too. What Jesus said to Nicodemus, He says to everyone: “God so loved the world that He gave His only begotten Son so that whoever believes in Him should not perish but have everlasting life” (John 3:16). So the conversation between Jesus and people in this world is an ongoing one. We still hear Him speaking to us in His Word. He calls us to repentance. He comforts us with the Gospel of forgiveness. He fills our hearts with joy with His promises of eternal life.

So it is only the visible part of Christ’s interaction with the world that came to an end with His ascension into heaven. He is still talking to us and listening to us; we just don’t see Him. Sometimes we may think that it would be good if we could see Him. But it is actually better this way. When Christ disappeared from the sight of the disciples that day outside Jerusalem, He “ascended far above all the heavens, that He might fill all things” (Ephesians 4:10). Now He is available to us at all times and in all places. We don’t have to travel to get to Him. We don’t have to wait to talk to Him. He is, according to His parting promise to His disciples, with us always, even to the end of the age.

John Klatt is pastor of Prince of Peace Lutheran Church in Loveland, Colorado.