GEMS FROM THE OLD TESTAMENT (SIXTH IN A SERIES)

“Then Jacob was left alone; and a Man wrestled with him until the breaking of day. Now when He saw that He did not prevail against him, He touched the socket of his hip; and the socket of Jacob’s hip was out of joint as He wrestled with him. And He said, ‘Let Me go, for the day breaks.’ But he said, ‘I will not let You go unless You bless me!’” (Genesis 32:24-26). 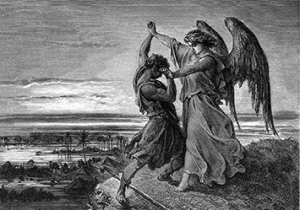 Instead of simply trusting in the Lord, Jacob took matters into his own hands.

That was the way Jacob operated through much of his life. He knew the Lord and heard of God’s promises from his father and grandfather, yet Jacob still felt that he needed to manipulate events to ensure all worked out well. He was not deterred by the fact that things didn’t always work out as well as he hoped.

For example, he wondered how he could be sure to get the blessing when his father was determined to give it to his brother. Merely trusting in God might not be enough. He concluded he needed to deceive his father to ensure he received it. That did not turn out well.

The Lord loved Jacob and for many years had worked to transform him from someone who needed to be in control to someone who trusted fully in God. To this end, the Lord approached Jacob near the ford of the Jabbok River.

Jacob thought he was well prepared for what was coming, but he didn’t anticipate a wrestling match that lasted through the night. The contest was a perfect draw until dawn. Then, with a mere touch, the Man dislocated Jacob’s hip. The injury was so severe that, from that day, he would not be able to walk without a limp.

Before this night, Jacob believed he needed to be in control of his life and that his problems were outside of himself; God, however, wanted Jacob to realize that his real struggle all along had been with Him. Jacob had been wrestling with God most of his life.

Jacob: “My problem, Lord, was that You gave me a father who wanted to give the blessing to my brother.”

The Lord: “No, Jacob, your problem was that you did not trust Me.”

The Lord had heard this before. Adam said, “The woman whom You gave to be with me, she gave me of the tree, and I ate” (Genesis 3:12).

The Lord hears similarly from us. We may think of our circumstances, lack of resources, or the maliciousness of others as reasons why we cannot fully trust God. Our problem, however, is not outside of us but rather within. We put limits on how much we will trust God. Whether we look at the day-to-day details of life or at the big picture of eternity, something inside of us feels that we need to help Him. This feeling increases intensely when we sense our life going in a direction different from what we think is best. That is when we think God really needs our help!

In truth, that is when we really need God’s help. He wants to lead us to the point at which we despair of our own wisdom and strength, and rely entirely on His. To transform us from being proud and controlling to being humble and trusting may require a process; but God loves us and will do what it takes to make it happen, even if it leaves us with a limp.

The Holy Spirit will bring the Word of God to bear as we experience life, so that we depend less on ourselves and trust ever more in God. One benefit of this is that we won’t feel the need to be in control anymore. We can take a breath and—finally—relax .