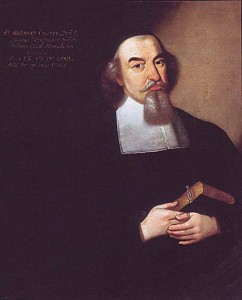 Abraham Calov was born in 1612 at Mohrungen, a small town in the Duchy of Prussia. Today this town is called Morąg and is part of northern Poland. Interestingly, Luther himself encouraged the establishment of this first Lutheran duchy, which had a largely German-speaking population. Abraham’s father, Peter Calov, was financial administrator to the Prince of Prussia.

“When you’re a hammer, everything looks like a nail.” That expression means that sometimes people get carried away with their authority and misuse it, or employ it too often. Calov was a scrapper, theologically speaking. This historical view of his being contentious or always ready for a fight is easily explained by recognizing the enemies of the Gospel with whom he had to contend. All his life in his teaching, preaching, and administration of the churches and schools he was called to, he faced foes of every stripe: the Catholics, the Reformed, and the Socinians. In Prussia, and later in Germany, his teaching and writing upheld against all comers the truth of Scripture as rediscovered by the earlier reformers. More on Calov’s foes below.

It’s hard to tell where Calov’s extensive education ends and his career begins. After his grade schooling locally, he studied philosophy at Konigsberg, earning a master’s degree in 1632. He then taught philosophy at Rostock, Germany. In 1637 he returned to Konigsberg with a degree in divinity to teach as an assistant professor. While there, he also served as a pastor, and became the superintendent of regional schools and churches. He also seems to have served in Danzig with similar duties for a time. Finally he was appointed as a professor of theology at Wittenberg in 1650, and became Dean of the Faculty. He died at Wittenberg in 1686.

Besides all his pastoral, teaching, and administrative work, Calov—like Luther—wrote and wrote and wrote. Among the dozens of books he authored, important standouts include a reference work of theology, Systema Locorum Theologicorum (12 volumes!), a commentary on Luther’s translation of the Bible, and a huge exposition of the whole Bible, with his own commentary.

If Abraham Calov had a main enemy, it was compromise. Forces within and outside of the Lutheran church sought to unify Christians on the basis of doctrinal compromise, just as they continue to do today. But Calov knew that giving up on a part of Scripture or a particular doctrine meant jeopardizing all of God’s Word, including even the doctrine of justification itself.

Chief among the proponents of compromise within Lutheranism during Calov’s day was Georg Calixtus. He was educated and later became a professor at the influential University of Helmstedt. His idea was that if the Catholic, Lutheran, and Reformed churches could agree merely on the Apostles’ Creed, that should be good enough to unify them. Abraham Calov opposed this idea with his writings and teachings until his death in 1686, demanding that Lutherans abandon the idea of theological compromise and return to the right teaching of Scripture as put forth in the Book of Concord.

I’d prefer to report that Calov’s efforts to return much of Eastern Europe to sound Christian teaching were entirely successful. Such efforts never are, as the enemies of right teaching are always active. He was the leading defender of orthodoxy during his adult lifetime, and his influence on future generations—those who would remain faithful to the Bible and the Lutheran Confessions—is immeasurable.

In the forward to his Biblia Novi Testamenti Illustrata, Abraham Calov wrote, “What is more useful than biblical theology? Theology without Scripture is not even deserving of its name. A theologian who speaks without Scripture should be ashamed!”

We couldn’t agree more, and we give glory to God for Calov’s contribution to the preservation of the true Christian faith.