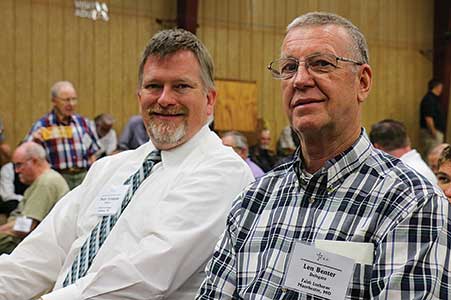 “Lead me in Your truth and teach me, for You are the God of my salvation; on You I wait all the day”  Psalm 25:5

I was raised on a ranch north of Grand Rapids, Minnesota. I grew up in the American Lutheran Church (now part of the ELCA) and graduated from Oak Grove Lutheran High School (ALC) in Fargo, N.Dak. in 1985.

During my junior year I realized that the ALC was not teaching the true good news of salvation through Jesus’ life, death, and resurrection, and so I began looking for a church that correctly taught the truth of God’s Word. I received a double degree in Computer Science and Electrical Engineering in 1989 from Washington University, St. Louis, Mo. (Dr. David Menton taught at the Medical School there). During this time I attended a Baptist church and also became good friends with a student who was a member of the Wisconsin Ev. Lutheran Synod (WELS). God used our friendship to lead me to Bible-based Lutheranism a couple years after we graduated. Several years after I joined the WELS, some problems developed in the congregation which resulted in a number of people, including me, leaving the church. We met independently for almost a year. One of the group started investigating the CLC and bringing us information. I and a number of others started attending and eventually joined Faith congregation, CLC, in Manchester (St. Louis). On my journey to the CLC I developed a passion for languages and have become conversant in French, German, Italian, Japanese, and Spanish. I have had the pleasure of going on four CLC Mission Helper trips to India (dabbling in Hindi, Tamil, and Telugu) as well as making a trip to Peru. As I look back, I see God’s guiding hand; even though the way has not always been easy, I am thankful that He has brought me to where I am today. I trust that He will continue to lead me and guide me in His truth. (We thank Pastor Evensen for introducing himself to our readers at our request. On August 3, 2014, he was ordained and installed as pastor at Rock of Ages Lutheran Church [CLC], Grand Rapids, Michigan.)