Graduating with the Spirit 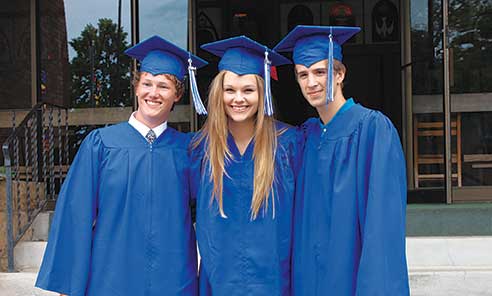 An example of “the same, but different” was evident at Immanuel Lutheran Church in Mankato on June 8, 2014. In the morning worship service the congregation remembered and celebrated the outpouring of the Holy Spirit on the first New Testament Pentecost. The same Spirit was present and actively working in that worship service just as He was among the apostles and the gathered crowd so many years ago. However, there was no sound of a rushing wind, no tongues of fire, and no sudden multi-lingual preaching. The way in which the Spirit was working was different.

Later that afternoon, Immanuel Lutheran High School graduated four seniors. As the graduates, their families, the faculty, and congregation members gathered together in God’s House, there could be no doubt that the graduates had been brought to that point by the blessing of God and the working of the same Spirit.

Faith which the Spirit had created through Baptism had been nurtured by the Spirit during eighteen years of instruction with God’s Word. Gifts given by the Spirit had been recognized and encouraged through the years of Christian education. The nurturing and growth accomplished by the Spirit in the years leading to graduation will likewise continue throughout the years that stretch out in front of each graduate. The same Spirit is demonstrably active in the lives and hearts of these young people, but the Pentecost afternoon of 2014 was vastly different than the one that took place in Jerusalem millennia earlier.

Things in popular culture are decidedly not the same and are forever changing. In social media, My Space was the “cool” place to be, then it became Facebook, now it’s Snapchat or Instagram, and it won’t take long for it to change again.

In this ever-changing world of pop-culture a current phenomenon is # — the hashtag. A hashtag is a quick and brief summary of someone, something, or some facet of life and its events.

In his address to the graduates, Mr. Kyle Ochsner offered these illustrations from pop-culture and then asked the question: “What is your hashtag(#)?” Using Ephesians 5:1-2, 15-21, Mr. Ochsner offered a few examples: #imitatorsofGod, #walkinlove, #redeemthetime.

Focusing on Paul’s words to “redeem the time,” Mr. Ochsner encouraged the graduates to “Make the Most Out of Every Opportunity” by abiding in the Word of God, following Jesus’ example, and walking with Him into eternity through the blessing of the Spirit.

Valedictorian Andrew Stelter thanked the large support-group that the graduates enjoyed during their years of Christian education at Immanuel. The assembly joined with the graduates in singing the Lord’s Prayer—their class hymn. The Triune God showered His blessing upon the assembly through the Benediction, after which the assembly joyfully sang, “Go, My Children, with My Blessing.”

The comfort and security of being under God’s gracious blessing was all the more poignant for one family in particular. Graduate Axton Becker was not present at the service. He had departed a week earlier to enter the Marine Corps. How blessed we are to know that the Lord’s shining countenance is not limited geographically nor by life circumstances.

Three thousand souls were not baptized at Immanuel that day, so Pentecost was different. However, four graduates were sent forth with a foundation built on the Rock and with the unchanging Spirit of God dwelling in them, and in that way Pentecost was miraculously and graciously the same.