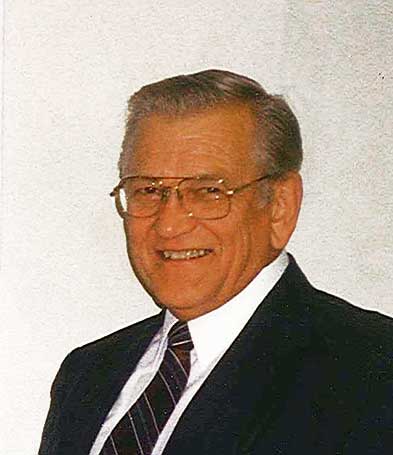 The Scripture passage “A man’s heart plans his way, but the Lord directs his steps” (Proverbs 16:9) comes to mind when one contemplates the many “steps” a child of God takes over the course of four-score years—such as the eventful 80-years-plus of our long-time Christian friend and fellow pastor in the Church of the Lutheran Confession, Paul Ferdinand Larsen.

The Lord who first gave Paul life directed his earthly pilgrimage along a path with many twists and turns, but every step of the way the servant’s focus, it becomes clear, was on the life in Christ Jesus which never ends. On Friday, August 2, just an hour after being released from the hospital into hospice care at his Eau Claire, Wis., home, and while surrounded by family members singing the triumphant “I Know that My Redeemer Lives,” Pastor Larsen entered the eternal peace and joy of his Lord and Savior.

The gospel comfort which he had proclaimed publicly for so many years to others—at Peace Lutheran, Mission, and St. Paul’s of White River, S.Dak. (‘66-70), Berea Lutheran, Inver Grove Heights, Minn. (‘70-83), Zion, Corpus, Christi, Tex. (‘83-86), Holy Truth, Ketchikan, Alaska (‘86-92), Our Savior’s, Jamestown, N.Dak. (‘92-98), Church of the Lutheran Confession, North Port, Fla. (‘98-2010)—was echoed by his pastor, Bruce Naumann, for the memorial service conducted at 5:00 p.m. Tuesday, August 6, at Messiah Lutheran Church, Eau Claire. The sermon text was Philippians 3:20-4:1 with its comforting assurance that in both life and death God’s believing children have a heavenly citizenship.

In addition to forty-plus years of pastoral ministry, the Lord directed the CLC church family to use brother Larsen’s Spirit-given gifts as Visitor for the Minnesota Conference, as a member of the Immanuel Lutheran College Board of Regents, and on the Synod’s Technology Committee.

Paul was the fourth of ten children born to Pastor and Mrs. Ulrik Larsen. His father baptized him at Zion Lutheran, Tracy, Minn., and confirmed him at Cross Lake Lutheran, Fosston, Minn. Drafted into the Army after high school (during the Korean War), and serving but a year (in Germany), Paul was led to prepare for the gospel ministry at Northwestern College, Watertown, Wis. At the time a spiritual “war”—doctrinal controversy—was tearing away at the “Lutheran Synodical Conference.” As the Lord through His holy Word and Spirit directed Paul’s steps, he joined the newly formed CLC in 1960, graduating from its seminary in Mankato, Minn. in 1963.

Paul and his faithful helpmate every step along the God-directed way, Kathleen (nee Healy), were united in Christian marriage on June 18, 1960. As one of the first steps in their pilgrim journey together, the Larsens rented an older house in Mankato to provide dorm space for up to twelve boys attending the newly established Immanuel Lutheran High School, College, and Seminary. Prior to his first call into the public ministry, another “twist and turn” occurred from 1963-66 when Paul served as the first caretaker at the relocated ILC in Eau Claire.

In August 2010 Pastor Larsen was released from his pastoral call in Florida to care for his Kathy, whom the Lord took home to Himself a month later at their home in Eau Claire. Their marital union had been blessed with five children who remain in their time of grace: Lisa (Mrs. Timothy Noeldner, Eau Claire), Jonathan (Mrs. Naomi, Jefferson City, Tenn.), Aaron (So. St. Paul, Minn.), Joel (Mrs. Jennifer, Lee’s Summit, Mo.), and Rachel (Mrs. Marchel Krieger, Jamestown, N.Dak.). Also among the survivors—besides the CLC church family—are thirteen grandchildren and two great-grandchildren.

For all the saints who from their labors rest,

Who Thee by faith before the world confest,

The golden evening brightens in the west;

Sweet is the calm of Paradise the blest.